A year ago today I was riding a painted horse up a volcano in a snowstorm. I was eating mysterious vegetables in a historic village by the sea with a stranger, and I was drinking wine in the middle of the day. But days like that can last a lifetime, so Emily will forever be my bff on the ninths of Februaries. She said, just as she took her first bite of Neapolitan Pizza, "I feel like my entire life has been leading up to this moment." I felt the same way.

My actual bff has no memories of that day. Floating in a haze of brain trauma and heavy medications, in the hands of skilled American Doctors, Italian food was the last thing on her mind. It took us months of wobbly walks and emotional talks before we could grasp the true horror of the alternate universe, in which her brain had waited a day to start leaking. The timing of her stroke was nothing short of miraculous. And what's more, finding those bonus aneurysms will someday save her life... plus a lot of headaches.


Jenny is well again... as clever and bright and beautiful and goofy as before, showing off the lumps under her hair to anyone brave enough to feel them. When she misspeaks or makes a wrong turn (as we all do sometimes), she glares and says, "Don't judge me, I'm brain damaged!"

As you can see by this picture, she looks good, but I know you're wondering: does she see good? When half of her field of vision desaturated, she thought her career as a painter in classical realism was gone forever. But on the one-year anniversary of our ill-fated departure date, she returned to her Atelier to paint. 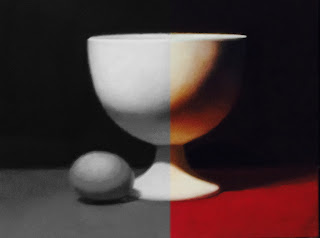 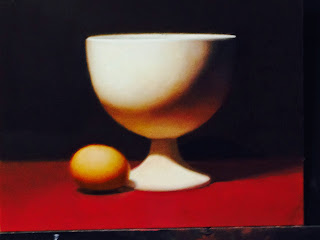 The beauty of Jenny's brain (and the beauty of all brains, really), is that her brain tissue may be
permanently damaged, but her mind has made up for it. The right side of her vision can now completely convince the left side of her vision that it is seeing color, and she is no longer seeing a washed-out world. I am rejoicing of course...but I am also not surprised. I had so much faith in her. I had great faith that the prayers I sent up with all the candles I lit in all those amazing churches would be heard, loud and clear.

We have not made plans to go back to Italy together... it's almost too scary, still...but she hopes to visit there with her daughters this summer.

As for me, my traveling experiences set up some resonances in my life. I kept some of the new friends I made (hi Fabio, Fabio, & Paolo! Hi Stephanie, Berrak, Davide & Emily!) and became closer friends with the Italians and Italianoids right around home (hi Amos & Giorgia! Hi Erin, April, Autumn, Sorrel, Gayle!). I kept my promise to drink wine with meals, eat better food, keep finding pleasure in the little things, and to learn more words (though sometimes the wine keeps them from sticking.) And darn if it doesn't seem like Italy is everywhere now. As one ex-pat (hi, Ron!) says, "It's not a country... it's a disease." (One that you go out of your way to catch, and whose itch hurts so good...)

I confess it hurts a little to be so far away now that I know what The Real Carnevale is all about. (Is it just me or has every event in the past year had a Carnevale theme?) I am again filling my eyes with the luscious costumed escapades of my reveler friends on Facebook. Alexa got to go this year, preparing half a dozen incredible costumes...and I am so very sympathetic to the painful emotional/artistic hangover she is about to face. "Le Febbre."

As for Vesuviette, she's made a few more appearances since I've been home (see above), plus she stars in a new story about a hot Venician romance between a volcano goddess and a wind god, which was incredibly challenging to write. (Hi, Shari!) The Vesuvian Affair is currently being read by publishers... (I must light more candles!) At the end of the story, the adventurer laments the rising sea levels, and asks the wind god if he can help out with the drought back home. Well, at least that part seems to have come true!