My Vacation vs. Mercury

My first full day in Italy is coming to an end. By the time I put my head down last night, I had completely forgotten how to sleep, so the day started late. I was in pajamas until about 4pm... but in my defense I spent the day doing some vacation repair.

First, I had to re-plan my Itinerary. What might have taken two hours on my big home computer took four here, since Italian websites are much friskier than Im used to. And everything went wrong and I had to enter my information three, four, nine times. #@$%&! Mercury!

I am also now carrying a few bricks in my suitcase. My phone, which was supposed to be text-able, does nothing. In my anguish, leaving, I forgot the camera battery re-charger, and brought the wrong charger for my laptop. This last brainfart means I cant get any work done and blogging more than short lists was out of the question. But my wonderful host, Fabio, took care of me. He found a new charger for only $120. After much swearing (at Mercury, natch), we found a better solution...I am typing this on a tiny bluetooth keyboard on my tablet!

This being Italy, some of the keys are in the wrong place. And for the life of me I cant find the apostrophe key. So anytime you want to correct my spelling...well, just blame #@$%& Mercury.

So far, the best part of Italy is the Montani family. Specifically, my dear friend Alexa, her 7 year old amazing daughter Eloisa, and the reason they are both Italians: Fabio. (A name that sounds best when you are sighing while you say it.) Fabio, an every-generation Italian, cooked for 5 or 6 hours today. Kale fritatta for lunch. Homemade spinach ravioli for dinner. Between times, some coffee sprinkled on ricotta cheese. And after dinner, liqueurs made  by his mother. (Limoncello cream last night. Tonight, medicinal Mirto.) There was also a kale pie in there somewhere! I told him this dinner was blog-worthy! Bravo, *sigh* Fabio!

When travelers think of Italy, they think of the castles and villas, the design and the art, the food and the beauty. But then theres the shopping malls. When we finally got out of the house today, we hit Alexas favorite Eurotrash store, where copyrights are freely infringed and designs make no sense...expressively! 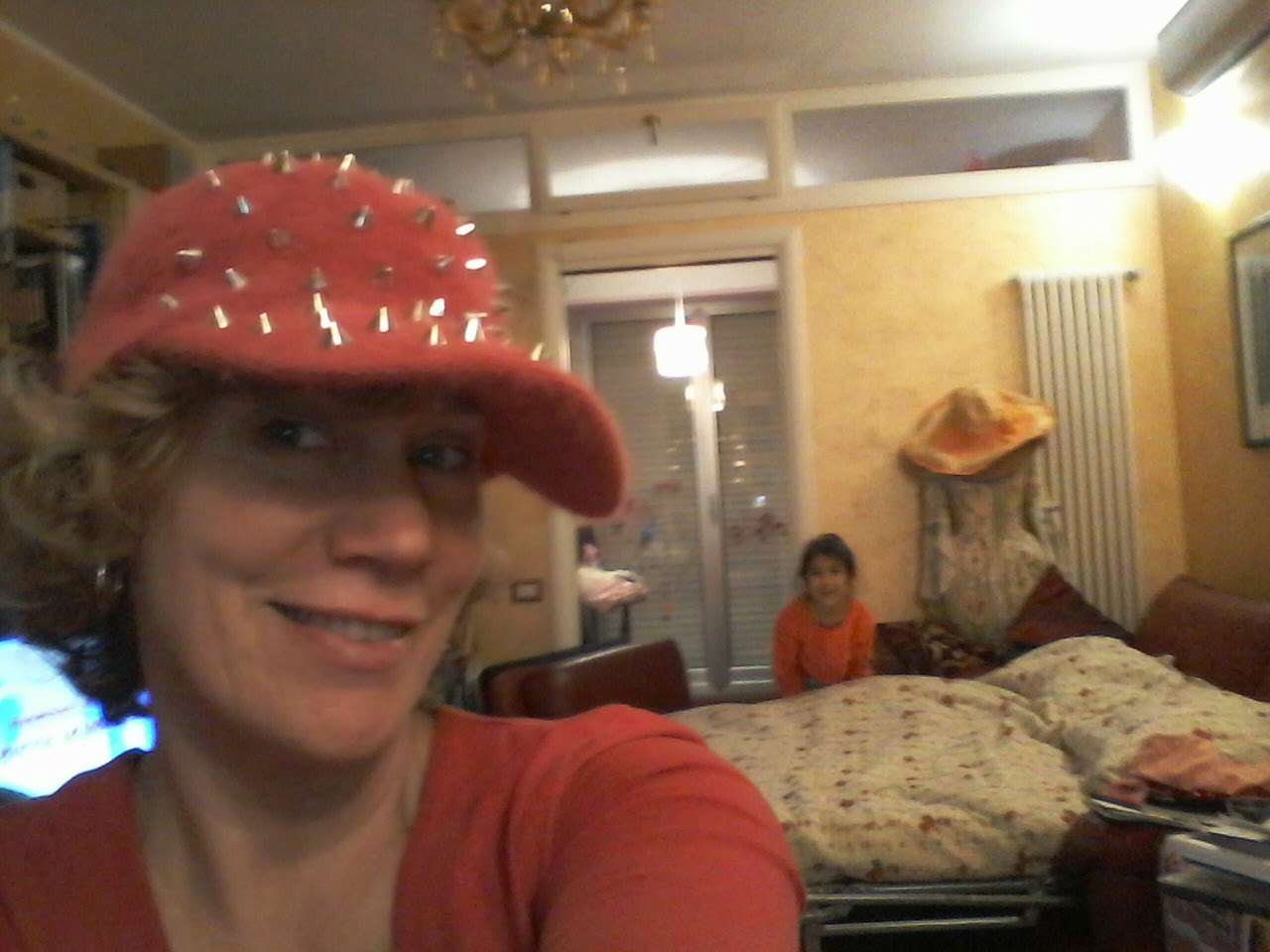 We were out at the mall around the exact time Jenny was in surgery back home. I bought her a badass Italian Fashion Hat to wear while recovering... soft and fuzzy on the inside... but....dont touch! When we got back to the WiFi there was this note from her sister:

Jenny's surgery went perfectly and she's back in her room, groggy and a little confused. She thinks it's 1999! She's talking and has got all her hair. The incision is tiny. I almost burst into tears with relief when I saw her and one of the first things she did is ask me to let you know.

So, I will be buying a lot of souvenirs for Jenny, as you can imagine. If anyone would like me to get her something from you, Paypal me and include instructions!