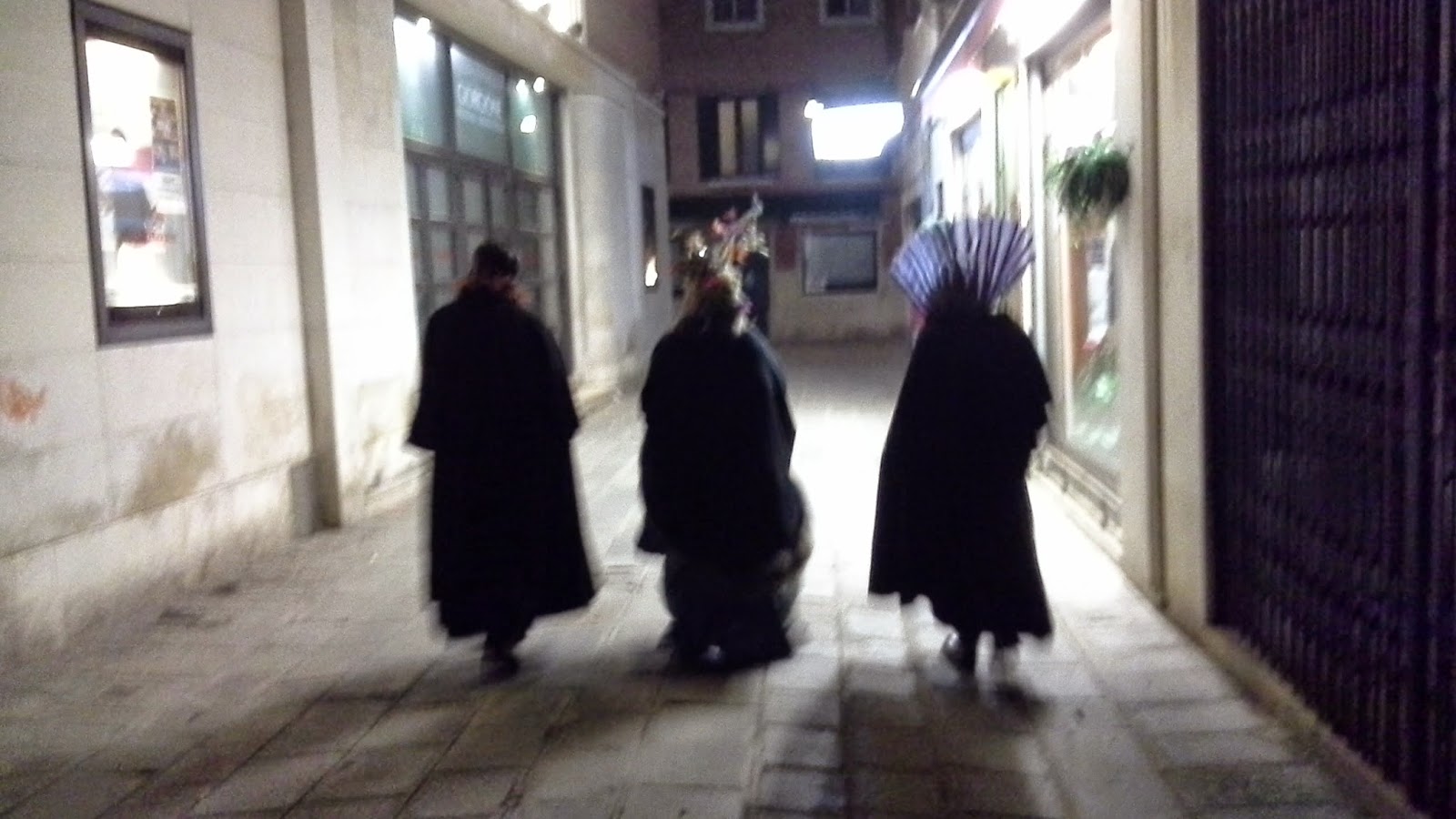 I finally found the place marked on my map for the party, but there was nothing there but a church with yet another color/grayscale apparition of the goddess and her kid. I lit my last candle for Jenny.

Three cloaked figures approached down the calle and I said two words to them: "Quinto Elemento?" They responded in rapid French, which I couldn't understand, but I knew to follow them, since the woman had butterflies in her whipped-up hair, and one of the men was dressed like a merman. They turned corners and swept over arched bridges, leading me deeper though the labyrinth until I was completely lost, off the map, as far from my known life as I could be.

Through a stone archway, we turned into a courtyard and entered a room breathing with light. I swapped out my low Italian leather ankle boots for my high-heeled boots that are shaped like Italy (a useful prop when asking people where they live), and made my way up the red-carpeted stairs into an empty Renaissance ballroom. A wine bar was set up near the french doors to the terrace, and the floor in front of the marble fireplace was littered with gigantic red velvet beanbags.

My mouth hanging agape, I stepped cautiously past a group of menacing but beautiful Aliens and Predators with spines, glowing eyes, springy stilts, and long dreadlocks. The bathroom was occupied by an artist covering a model in silver body paint and wiring her hair with lights, so I checked my lipstick in the powder room mirror and made two American friends—military twins as surprised to be here as I was. At the coat check I turned my head and caught the eye, for the first time, of a young Roman nobleman who looked like he'd stepped out of a painting in the Borghese Gallery. It was Carnevale, but it was also the Fifth Element. A past and future mashup of a unique moment out of time. (Oh, and the fifth element, in the movie, after fire, earth, air, and water, is love.)

My memories of the night are dissolving into patchwork pieces, threads of motion and conversation barely connecting the crystaline images: statuesque blondes in clingy gold lamé, Zorg wigs and haircuts, antlered girls in diaphanous dresses dancing around columns, Victorian beauties, bearded monks, hors doêvres that looked like space shrimp, a giggling male Leeloo, and a seven-foot-tall schwa with glowing fingers that probed the faces and bodies of women who stood still for it...

Throughout the night, art was being born like, well, like new rock being formed on the slopes of an active volcano. More and more painted bodies swirled the room, more and more faces appeared, and the walls were pulsing with light.

What a forceful hand the universe had taken in getting me here tonight...but it all seemed gentle and natural and congenial now. Stephanie introduced me to some of her interesting, creative, beautiful friends. Paolo handed me a glass of Prosecco. 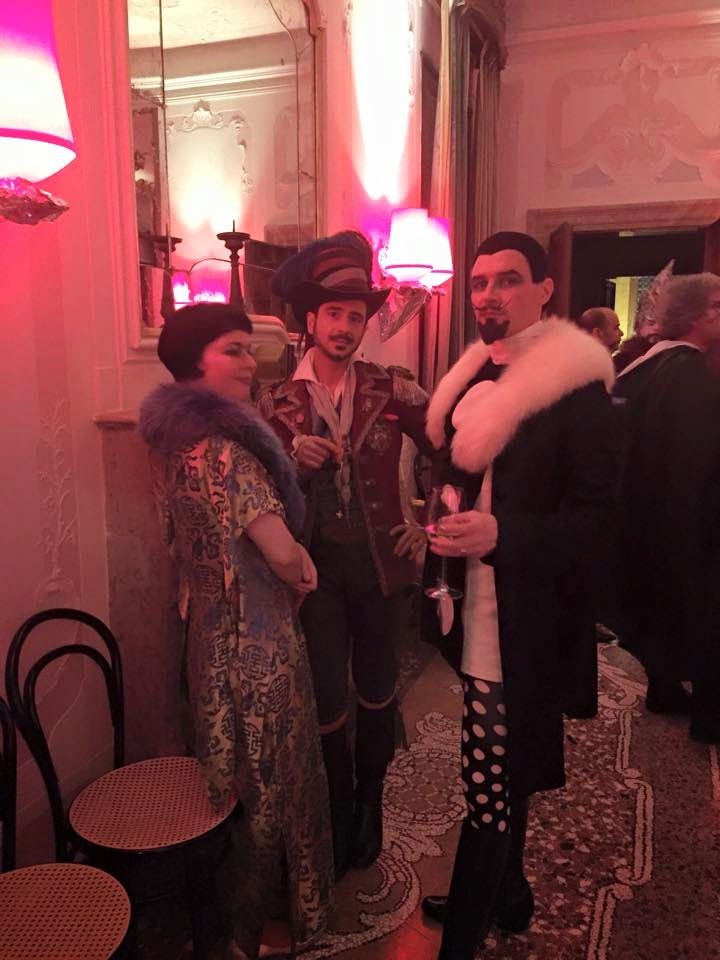 I love the truly great parties. You arrive knowing hardly anyone, but as the night wears on and you chase around from one conversation to another, as you stop and really look at what people have brought, the assembled crowd becomes recognizable.

Strangers become friends, and by the time the party winds down, you are bonded and sad to say goodbye. Whatever happens the next day, when you see these people back in real life, you know they are truly magical because you saw them that way for the first time.

As always, my life has a Cinderella theme. I knew I would have to be packed and out of my hotel at 7:30 that morning, to be on the 10am plane.


So I danced. And conversed. And played with the beautifuls. I suggested the painter working on the enormous canvas add some yellow. I set the twins on a quest to find the best kisser. I helped Paolo look for the elusive DJ. The visual artist who had created the projected environment took me on a tour of his special effects behind the scenes of the palazzo—a ballroom on the third floor, enormous parlors filled with art, moonlit terraces. On the top floor, windows wide open over the sleeping city, the behind-the-scenes rooms where the creative team stayed, they gathered, passed a joint.  One of them liked me and gave me a precious souvenir: a bottle of wine from his family's vineyard. (I may also have been slipped some of the science-fiction drug Chew-Z, which for weeks or months blends dreamlike hallucinations into the fabric of reality.)

Erin arrived late, and everyone kissed her fondly—for in this loving circle of creative friends, in this passionate country, this is what they do, they lean in and kiss you. We languished deliriously on the beanbags and I offered her a piece of lava to thank her for drawing me in to her out-of-this world world. I was so filled with happiness (and Prosecco) that I decided the souvenir I should really bring home for everyone was kisses, pure happy love energy from my adventure. And this would change America, and the world would become a better place. (If you love this blog, then please, when you see me again, feel free to lean in and collect.)


The light artist helped me find my way safely back to my hotel in the wee hours. I had almost forgotten who I was behind the mask, who I had been before Carnavale had created Vesuviette. I absolutely hated to close the door on this experience—and the delicious uomo who walked me there—but my time here was over, and somewhere in my heart, real life was calling me back.
Posted by Krs10 at 1:47 PM