I cannot quite explain what happened to me that last night In Italy. (Certainly not when my family is reading this blog.) (Hi, Dad.)

But you know me. You know I love my moments. All my life I have felt there is so much that happens in a single second that reverberates through time, through the web of stories that connect us, one to another, that it is often hard to explain myself.

And so much converged on that one night in Venice, away from my normal reality, and being completely on my own, my memories and imagination are in constant negotiation. But it was a night of pure celebration, of pure art, and, as those who are not spectators are artists, the city gave me permission to create my own story.

My dress was an olive green taffeta ballgown that hit below the knee, with a foot-wide sash that I wore in an enormous bow in my hair, pinned with a brass star. Under the dress I wore a clingy sheath, cluttered with color, and over it a blingy steampunk corset. As I dressed for the party in my layers of sensuous fabric and structure (putting on a corset single-handedly is not recommended), color, sparkle, and texture (five necklaces, dangerous lips), I honored the hard journey behind me by constructing a new persona: Vesuviette the volcano nymph. I pulled my black gloves up my arms, wrapped myself in faux fur, and left the hotel with a few lava rocks from the crater in my evening bag.

My only task, that day, had been to find a mask. The ones along the canal, near the main piazza, were all so similar. I had met a group of teenagers who looked like they were wearing art. They pointed in the direction of the shop where they'd found the store, and told me to follow my nose... there was incense.

Somehow, in the labyrinthine canyons, I walked right into the store.  The owner and her husband helped me try on a dozen masks. We found one with a spiral, like a question mark, a little music in it, and some volcanic crackled red gold. A little glue was all we needed to affix a lava pebble.

When I stepped out in the mask, Venezia seemed to embrace me. I turned a corner to find a parade of revelers following a horn, and a drum, and swept me along with them for a few blocks until they diverged from my map. The city unfolded before me... and then I got lost. 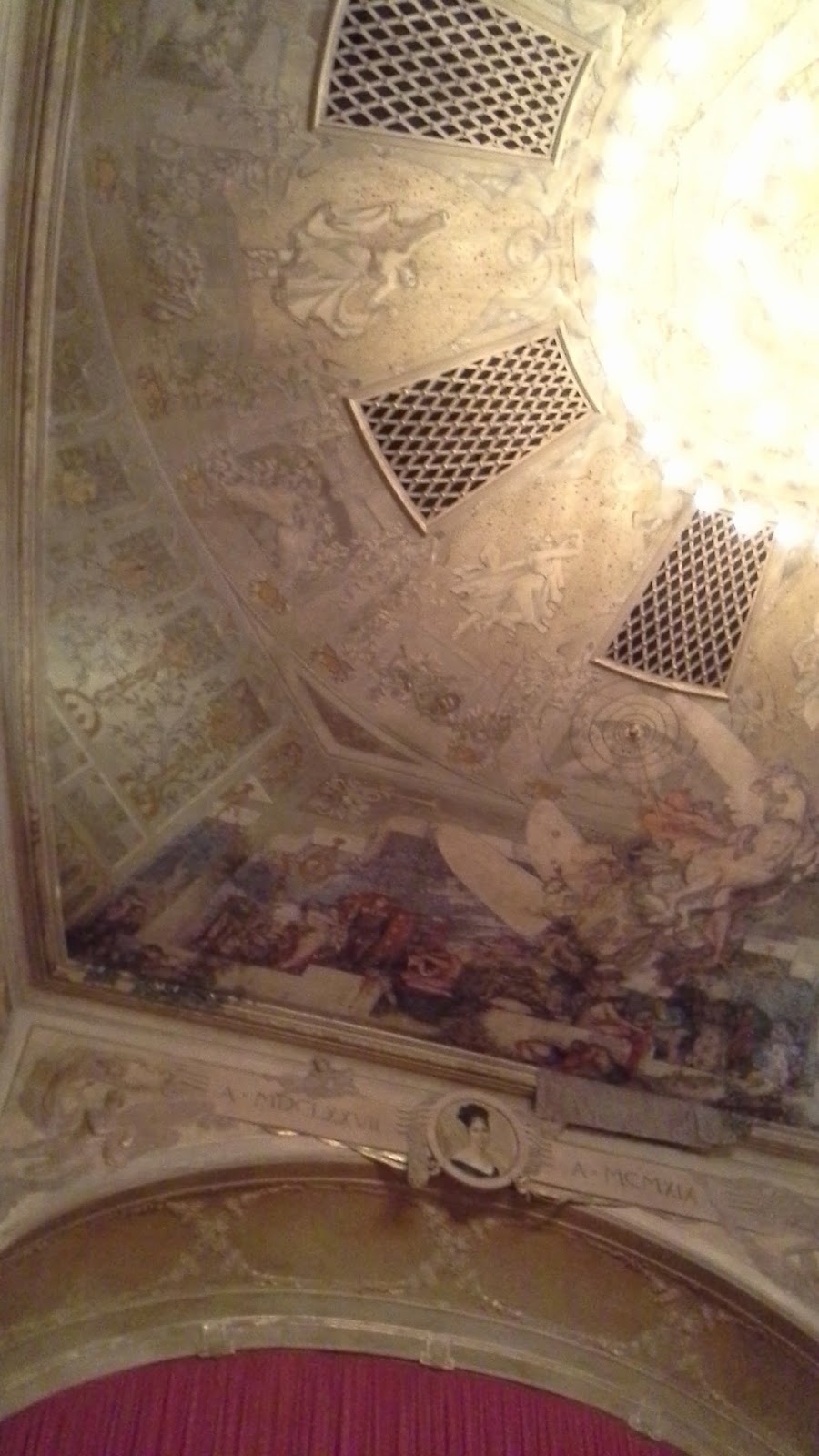 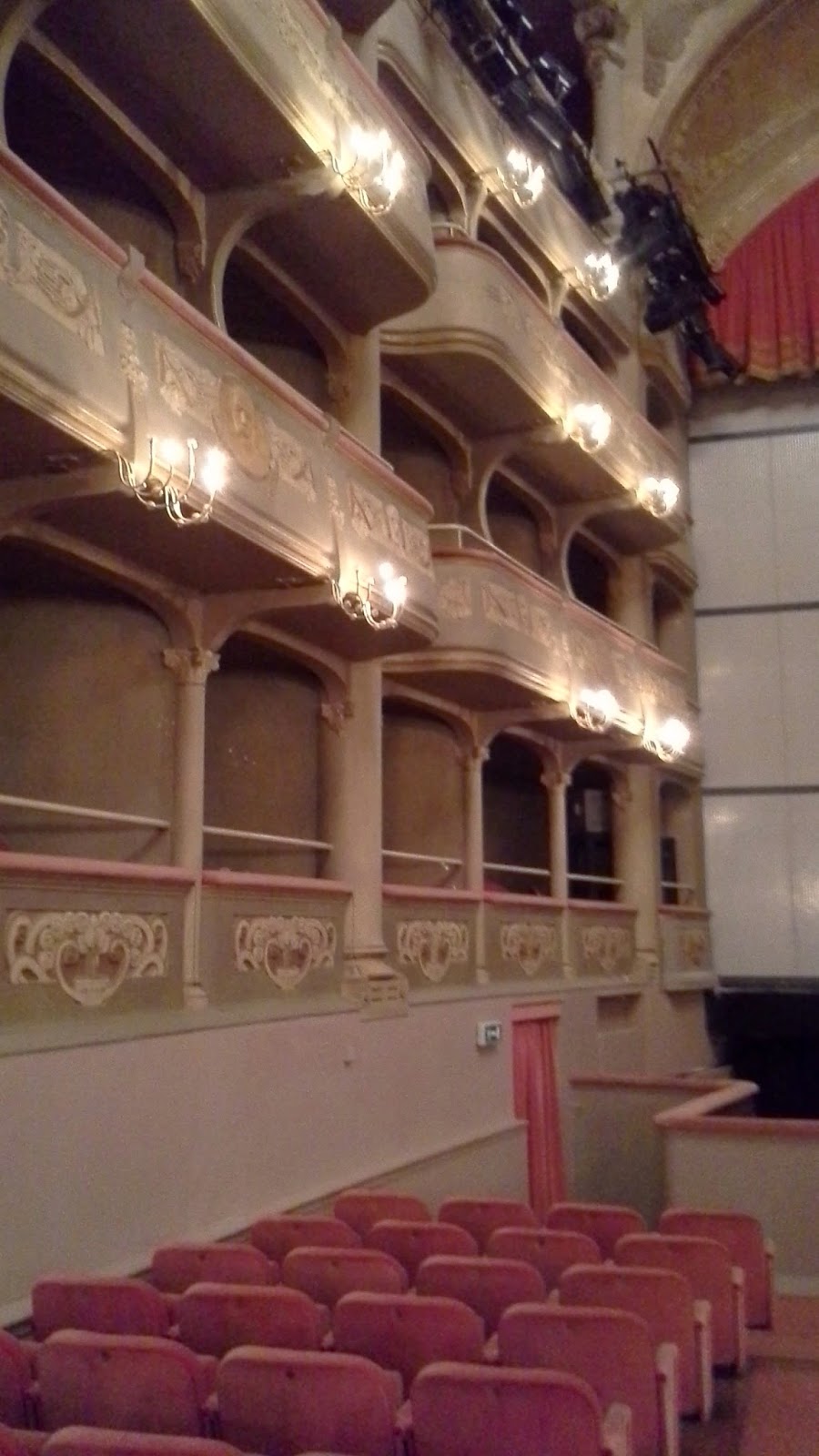 A man in uniform approached me and I held out my map and asked him, Dove sono? Where am I? He was happy to point me on my way, but then told me he was a fireman at the opera theater and would I like to see it?

A fireman in an opera theater. That's like a horse on a volcano. WHO WRITES THIS STUFF?* Vesuviette said yes.

Soon I realized I was all alone in this historic building (I still don't know which one) with a strange man who was walking very close to me as we moved past the velvet chairs. Just as when I chose to hack the volcano, no one knew where I was.

For less than an instant, undefined artistic terrors flashed though me...coming on stage unprepared...bringing The Awesome to an empty house...being worthy of my dreams...but then they were gone, replaced by a longing to contribute...and a dream of future spirits in the empty seats, enjoying the opera (plural of opus) that might still issue from my now-stifled muses... I asked them to help me rise up, somehow, to this exquisite, unexpected moment.

At the door back out to the street, Jean-Luc scooped me in by the waist and pulled me close (more interested, it seemed, in starting fires than in putting them out....) (He was dealing with a volcano nymph after all....) Startled, I thanked him and said goodbye, but noted his invitation to return. I floated towards my planned destination, feeling like I just might erupt.