The next day I decided to pop the 20 Euro for the 2-hour crater shuttle, then spend the afternoon visiting Pompeii.

In the shuttle office, there was a phone call confirming that the road was open. I loaded my overnight backpack into the van and we headed up past the views and the heads.  I had read that from the top parking lot it is about a half-hour hike to the crater. The travel writer had seen women walk up it in heels. 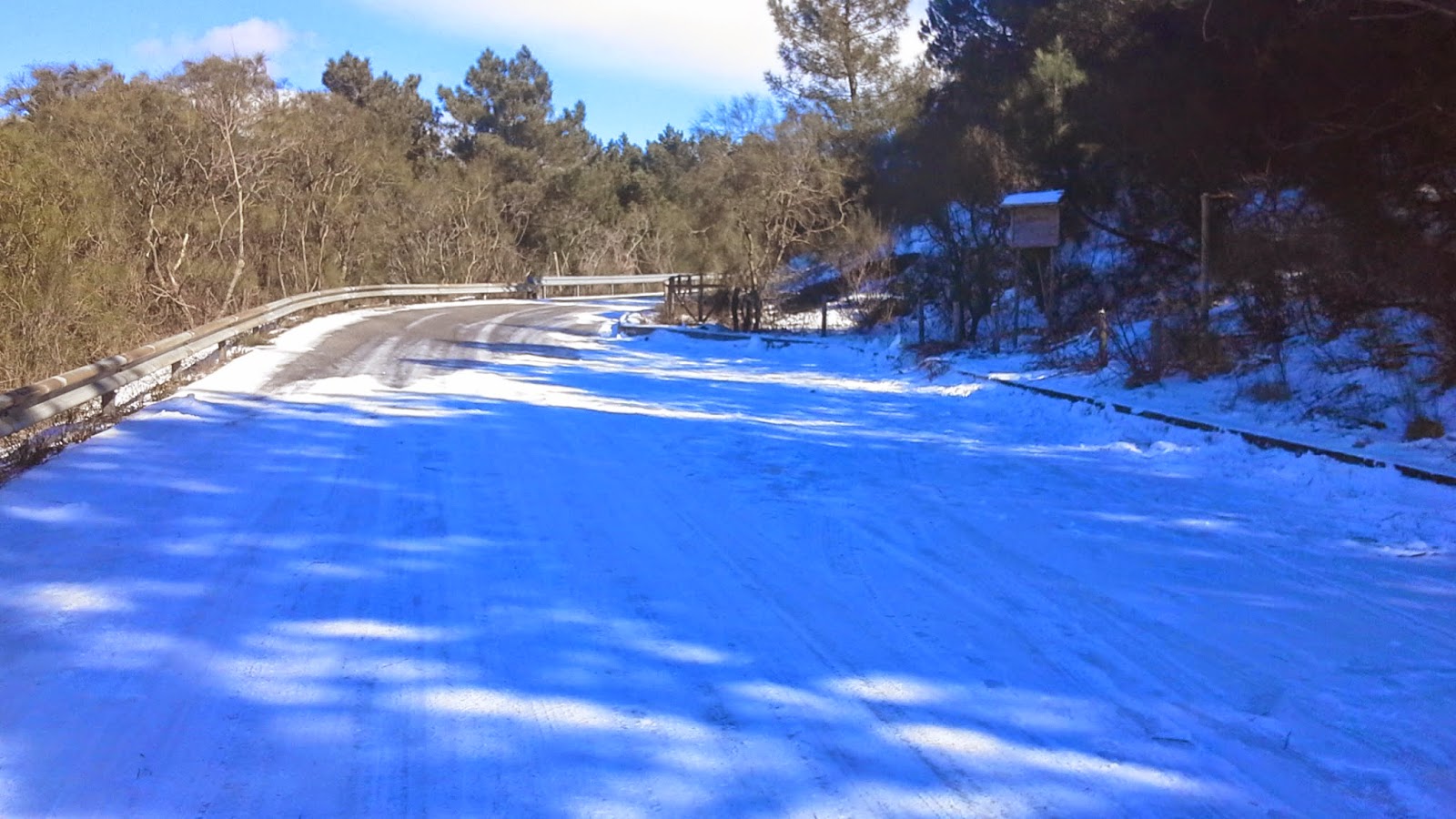 A little ways past where the road had been blocked yesterday, someone flagged the shuttle down to say the road was too icy to pass. The driver, who had given us zero information about the mountain, told us we could walk from there. It would take just a little longer, but he would wait. (The couple from Indiana grumbled that these people just don't know how to drive on snow.) 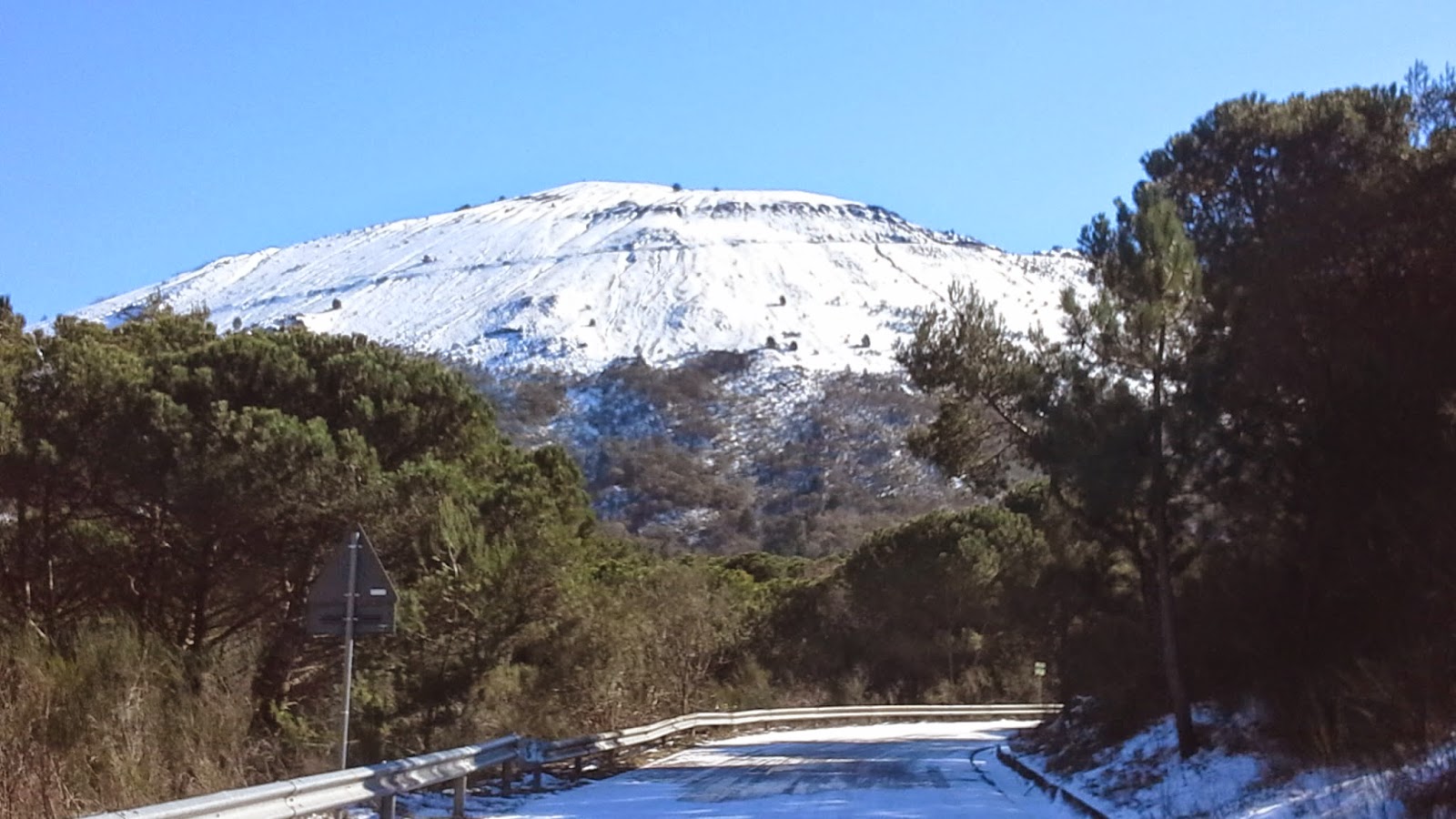 Even though I teach fitness, I am a pretty slow hiker. Soon the group (from Australia and London as well as Indiana) had all gone around the bend and I was alone. 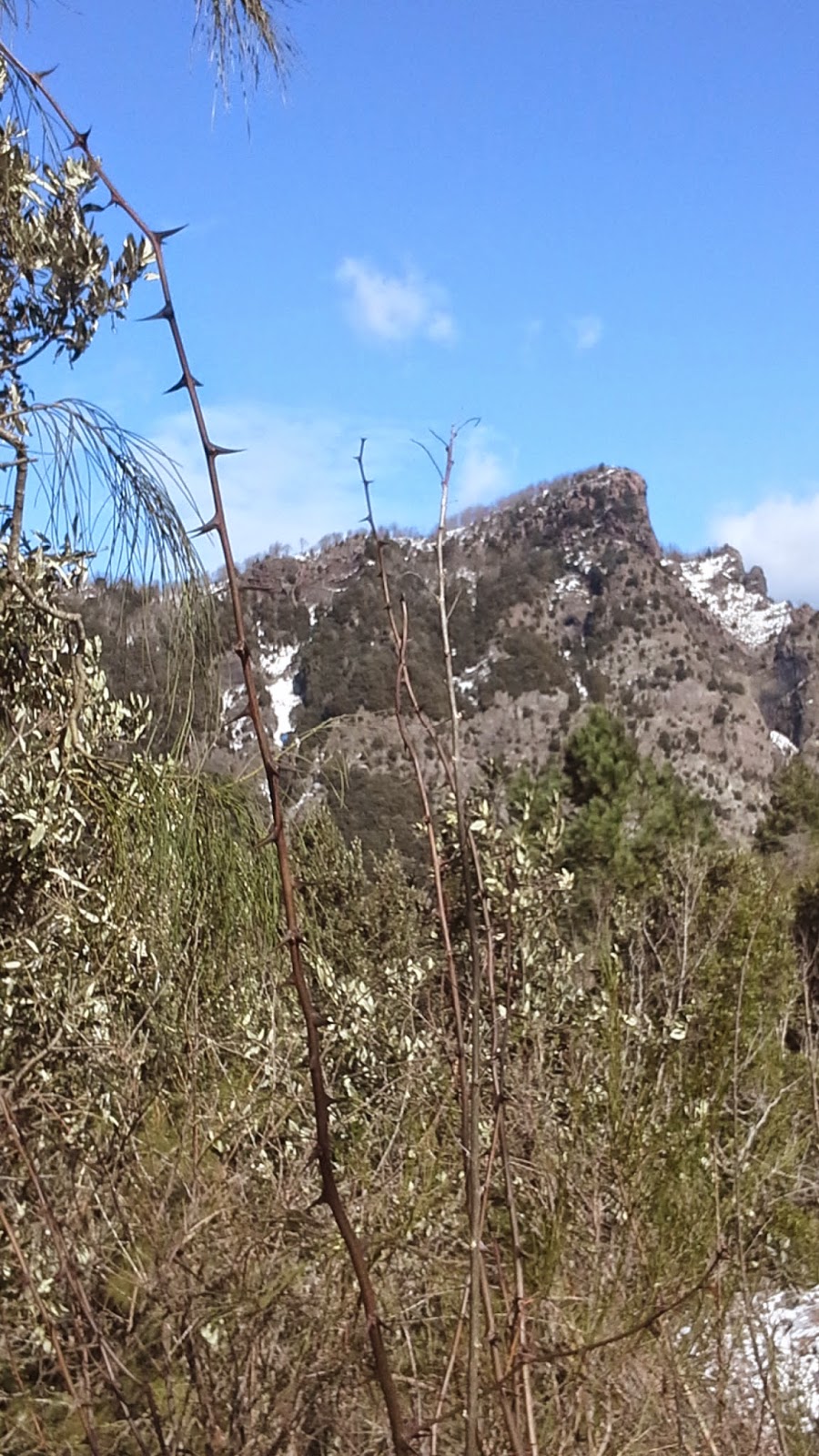 For good, though I did not know it at the time. 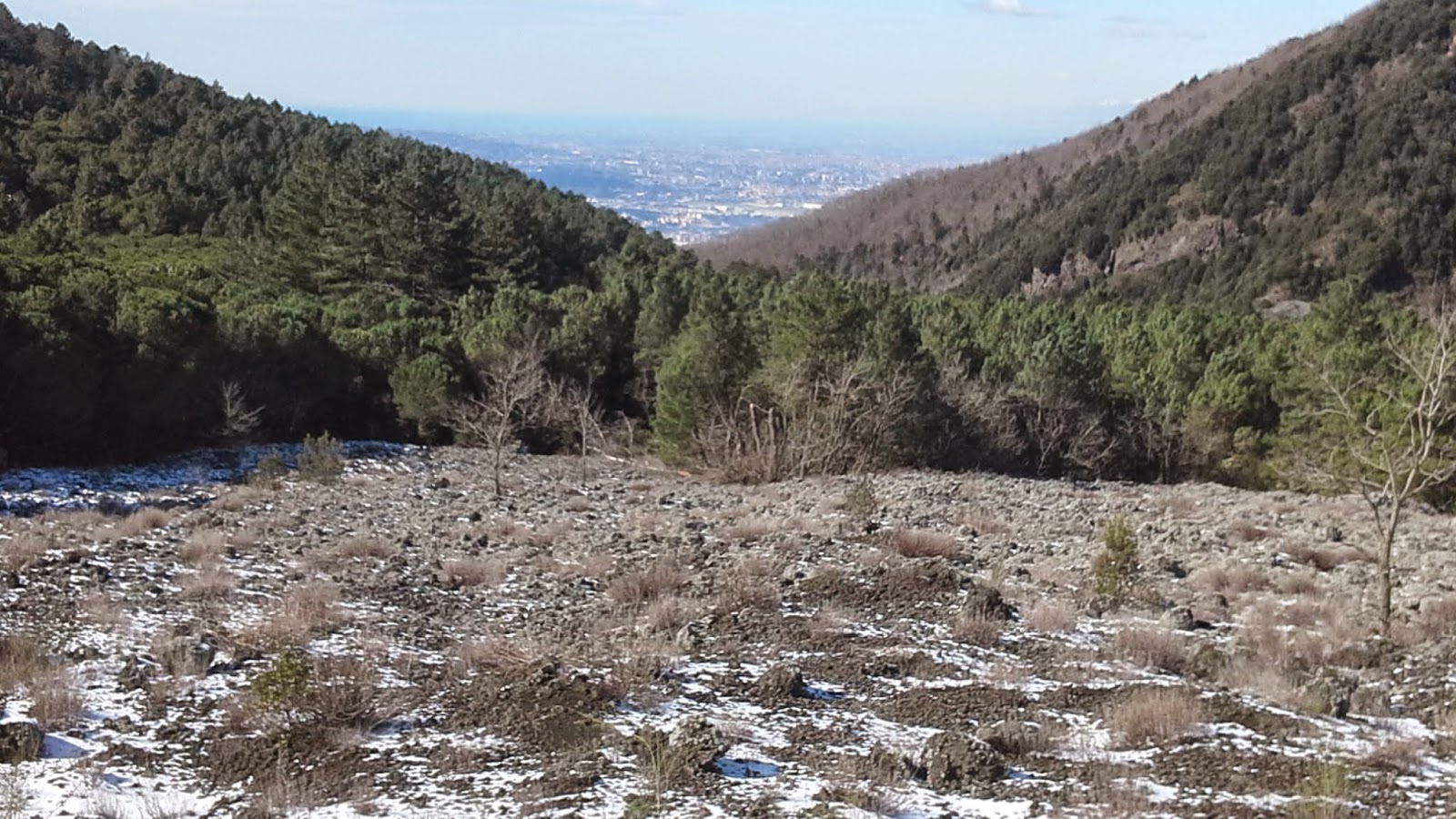 Just before I arrived at the lava flow we'd ridden to yesterday, there was a fork in the road.

A random lady came out of nowhere and told me the left fork went up to the crater. This is a national park, but there weren't any of the informative brown signs we are accustomed to here.

In Italy, you have to kind of feel your way. 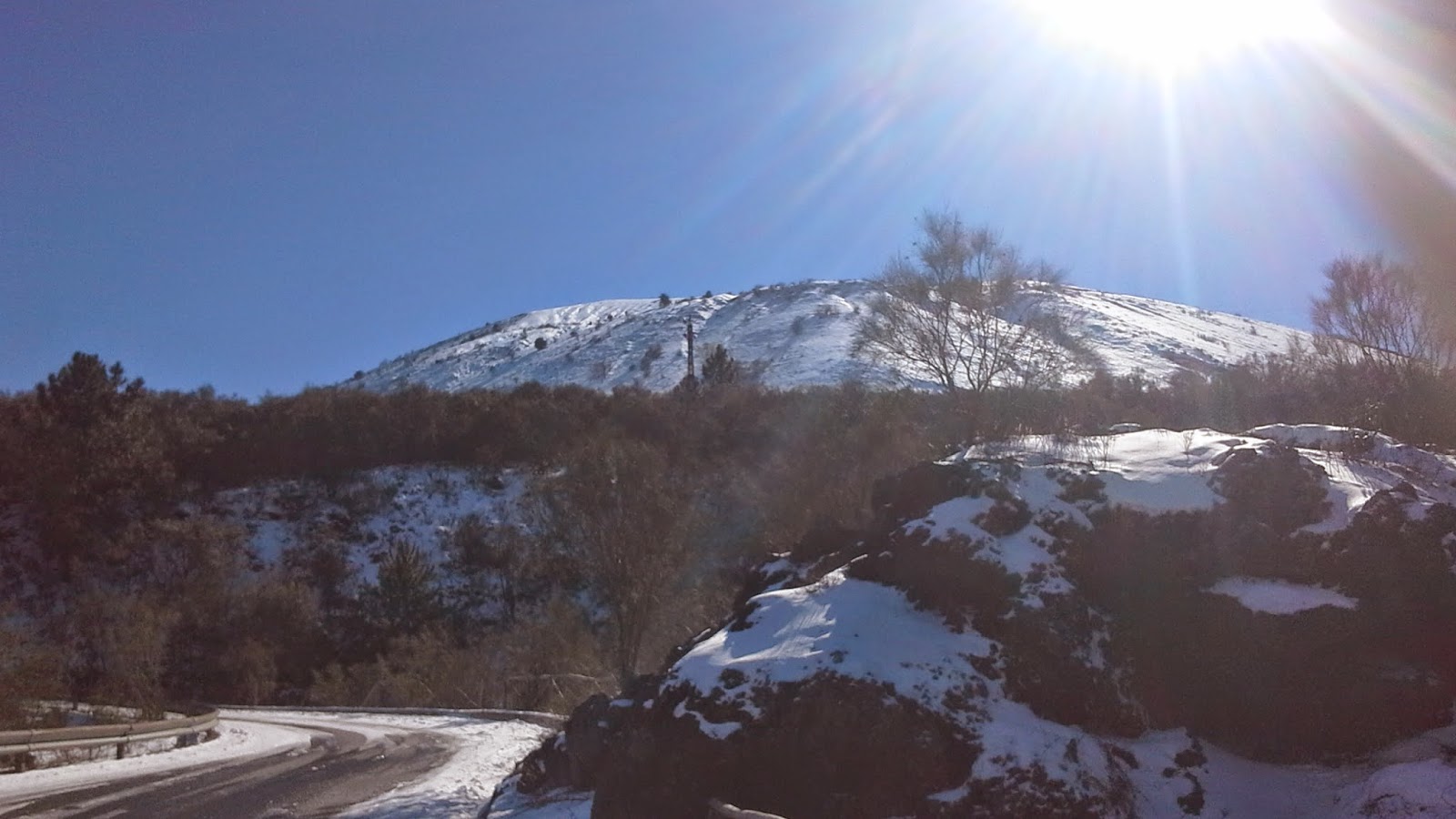 I was getting tired of finding another curve around every curve. My hips were getting sore. The top seemed so close. He said it was just an extra half-hour.

It was awfully quiet. I finally remembered I had my iPod in my satchel. The first song that came on was my friend Daniel Finnamore playing the strange and magnificent "Study for Opposing Sonorities" by Debussy, which seemed an appropriate commentary on the strange divergences my life had been taking lately, then "Prelude: Hills of Anacapri."

"Your battery is low," my iPod announced, which is weird; it never talks to me.

I should probably go back, I thought.

What, after coming all this way? I'm halfway around the world! What it took to get here!!!!

When will I get a chance to do this again?

What if the shuttle went back without me? I weighed my options, did a mental accounting of the contents of my overnight pack. Mostly clothes. And that giant pasta I bought in Ercolaneo.

I have everything I really need.

I need to let go of things anyway.

Alone with my thoughts, I felt like I was touching the edges of my mind. I could slip and fall into the crater. I could get space madness and throw myself over the edge, a sacrifice to the goddess. Perhaps there would be a spaceship, like the one that was calling all those people to Devil's Tower in Close Encounters of the Third Kind.

Another fork in the road. No signs, no random ladies. Again, I went left. 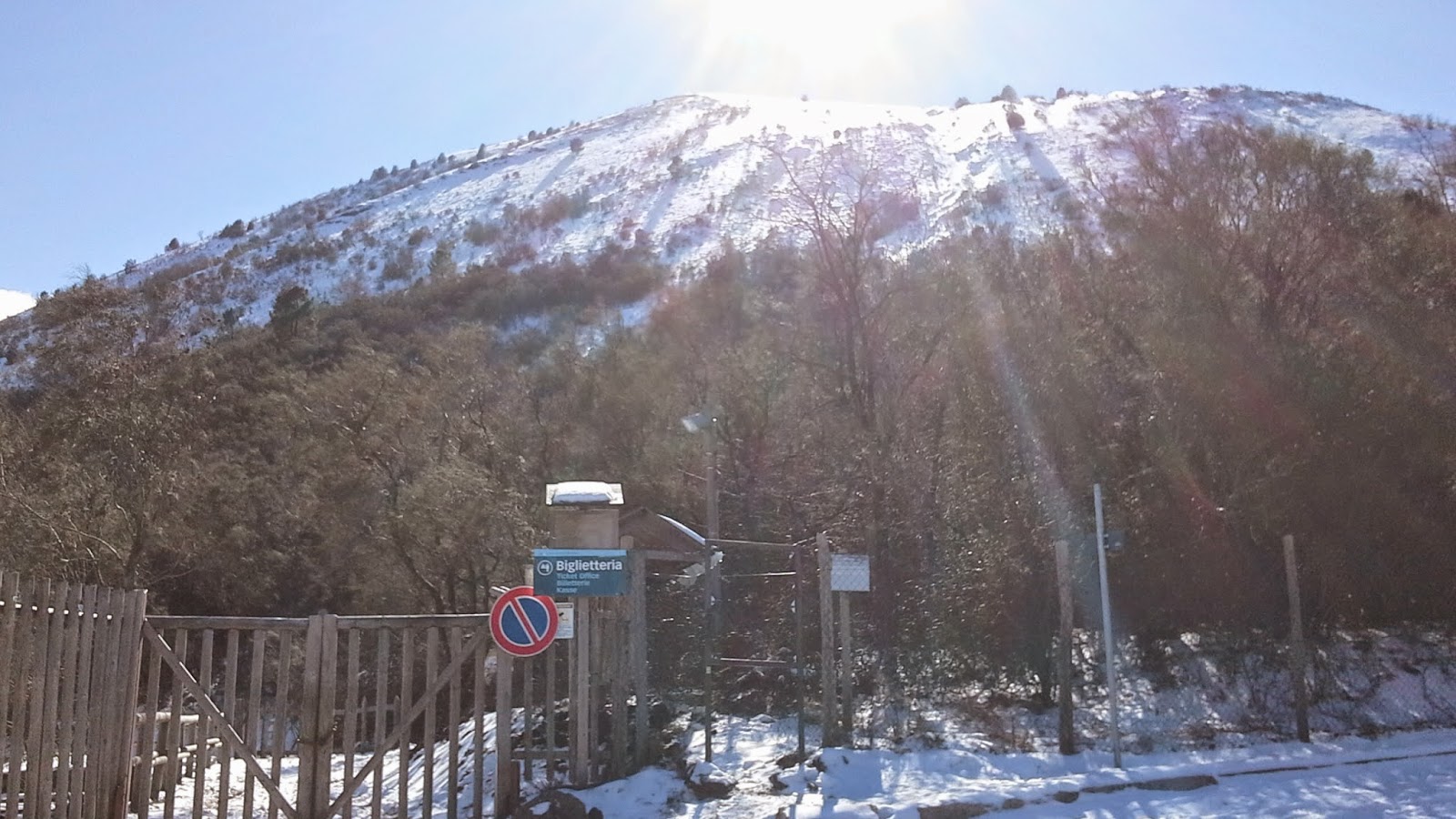 At last I made it to a staging area.

I've come all this way. They can't lock me out.

If you zoom in, you'll see a big hole in the fence on the gate. 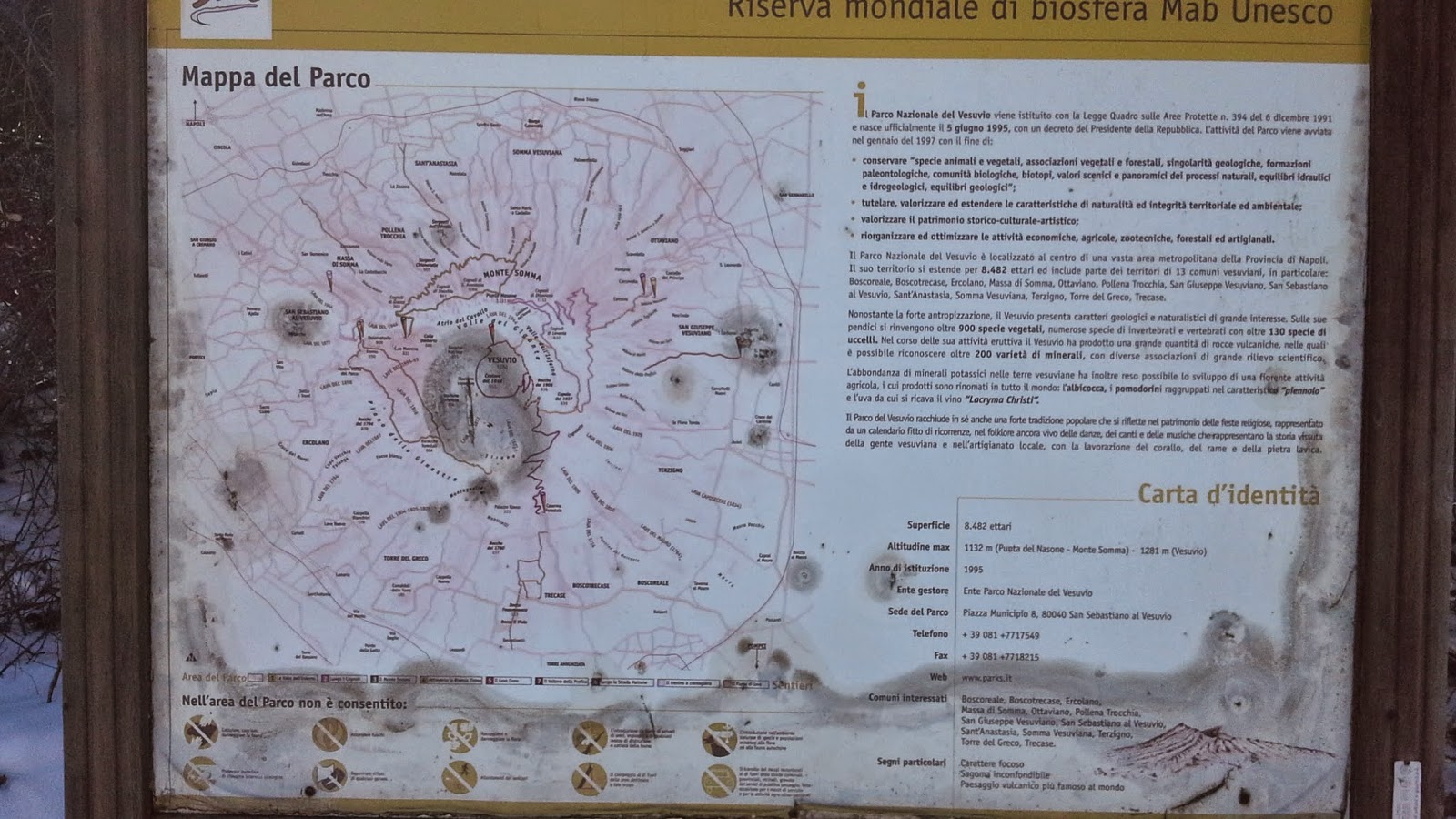 Here's the map of the crater. No "you are here" marker. No kilometer measurings. Only a forward path. 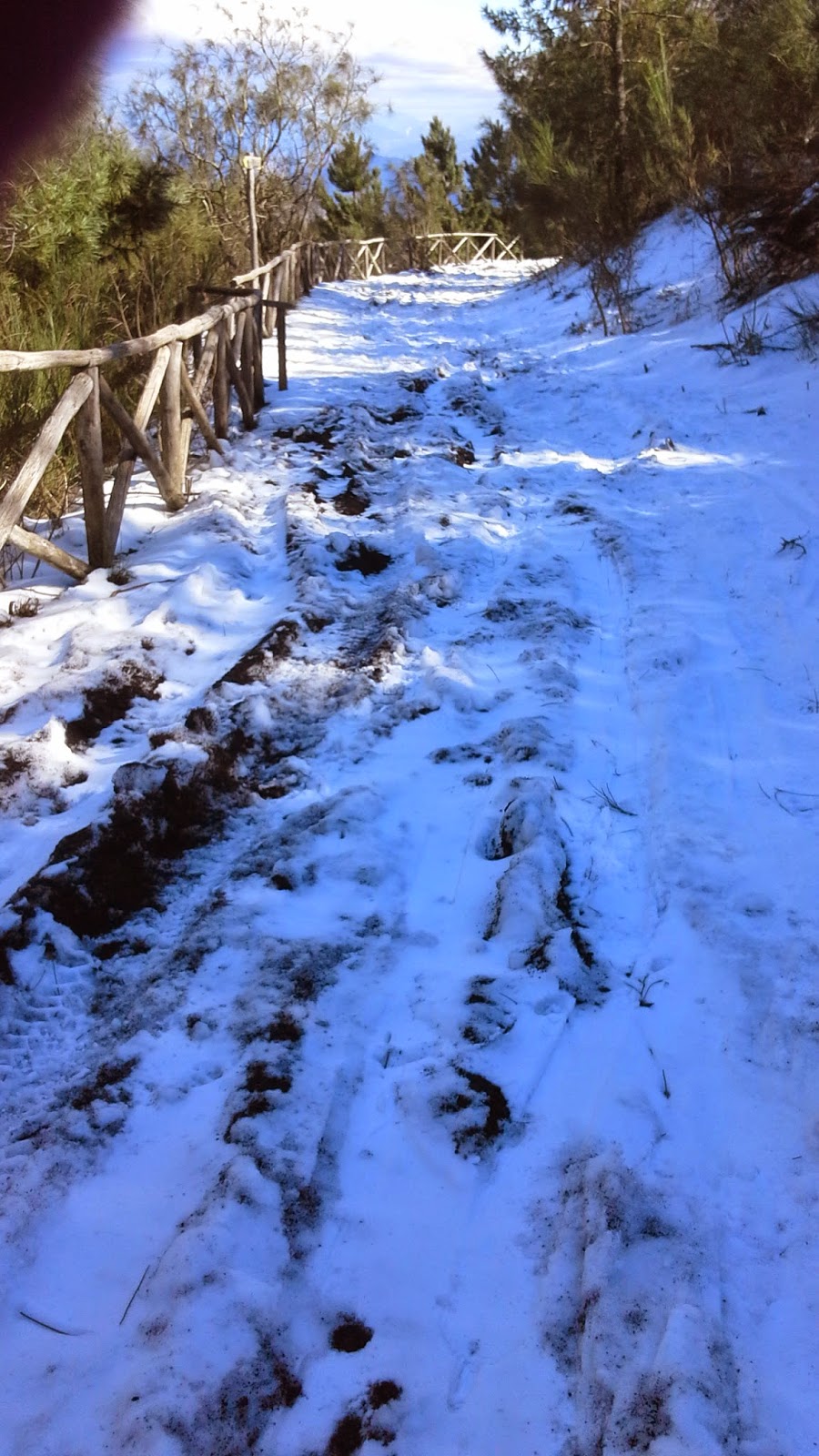 I'm a Colorado girl. Not afraid of a little snow. 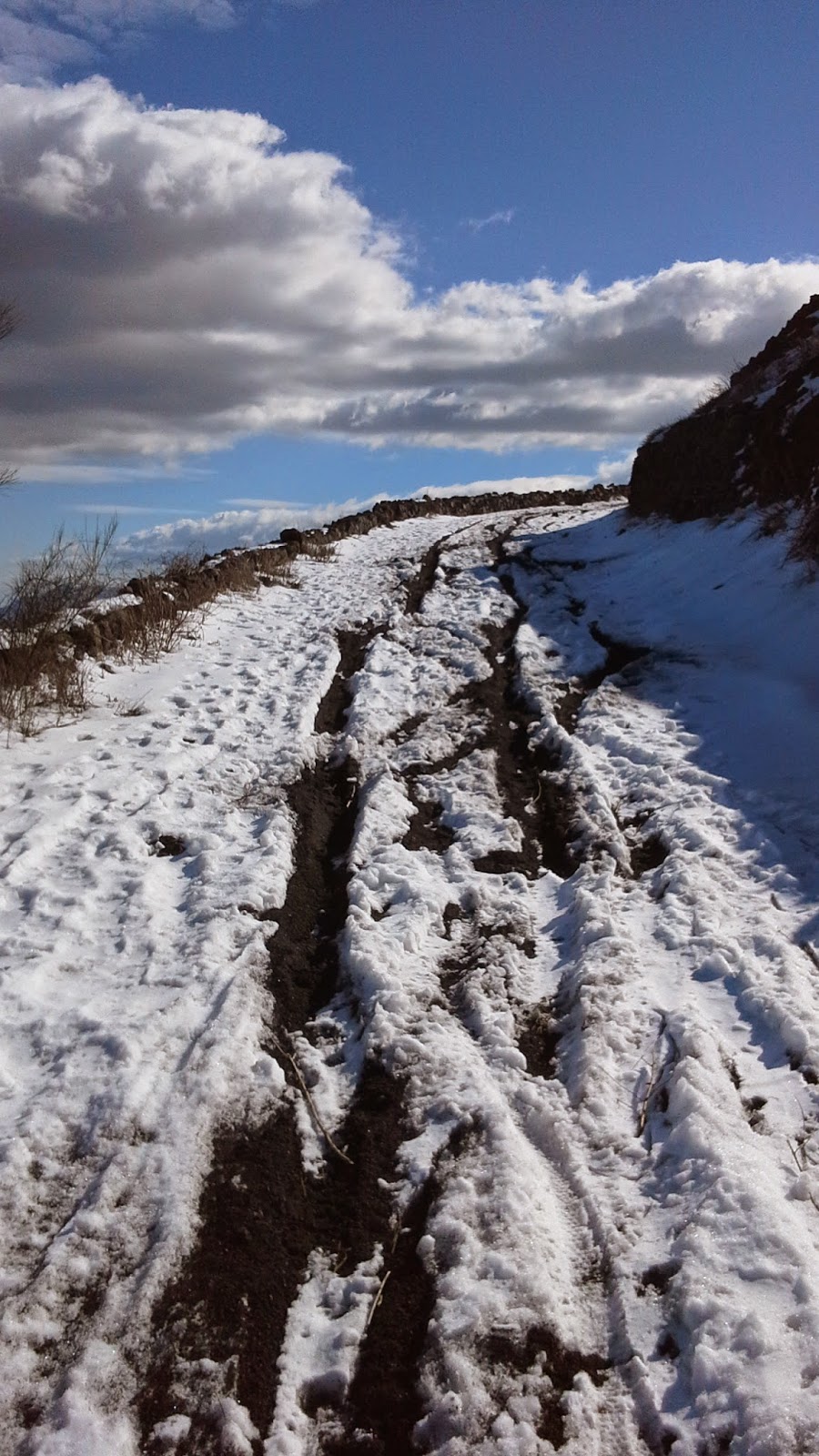 Am I out of my depth?

No one knows I'm here. No cell service. 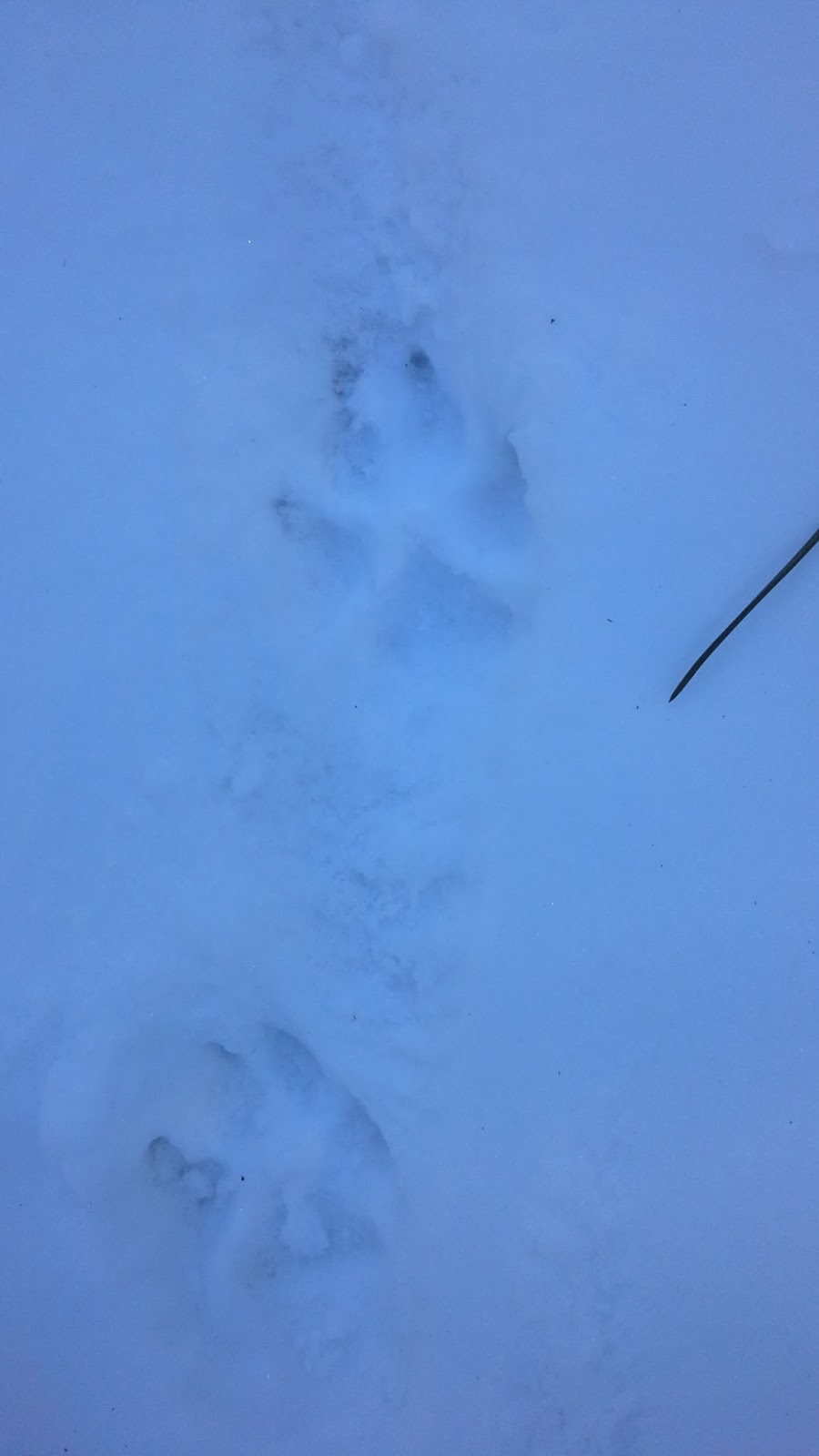 Are those wolf tracks? Romulus & Remus...

Bruce Springsteen sings Thundercrack. The iPod announces, again, that it is running low on power.

Tell me about it. 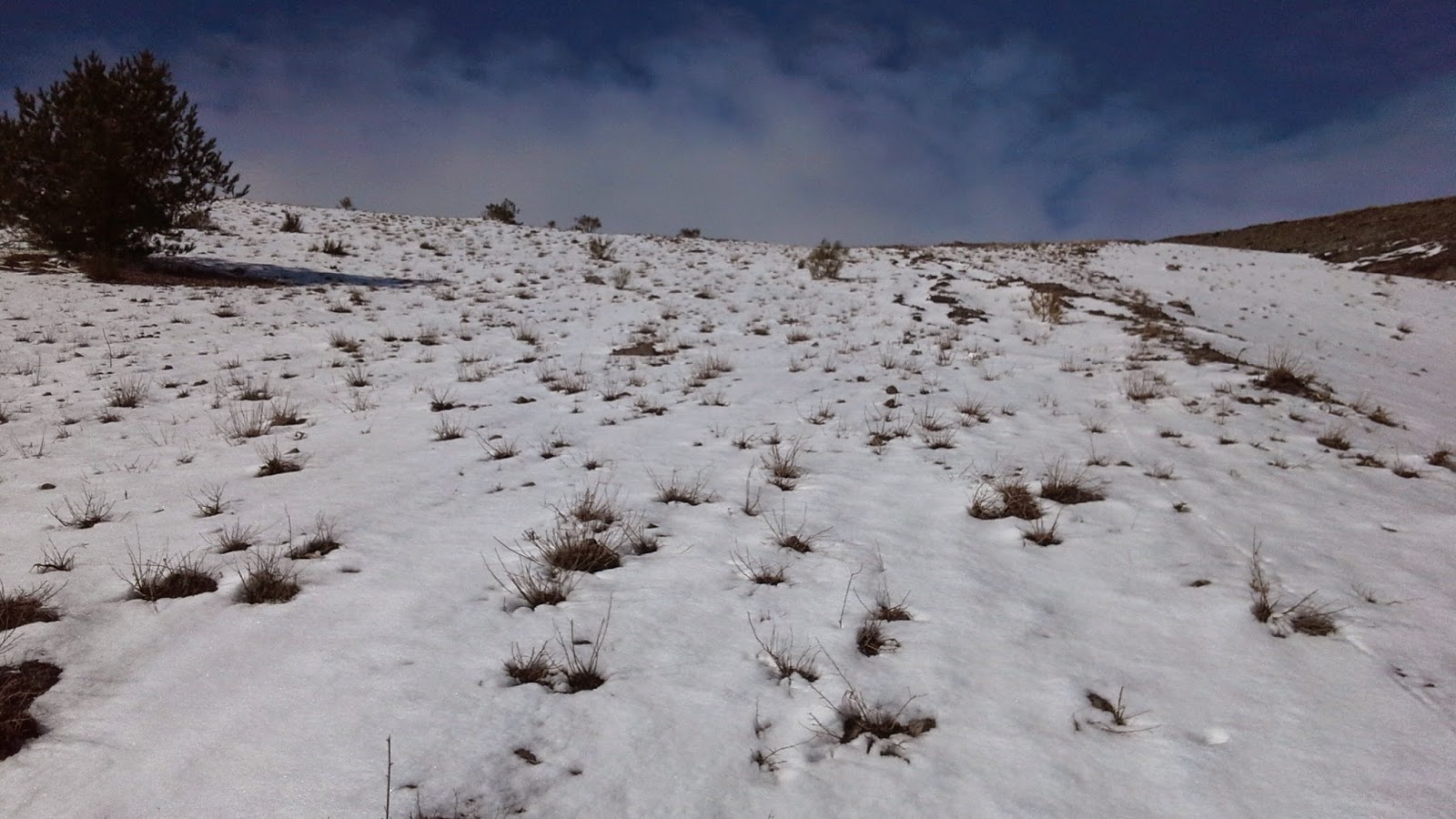 Oh no. I'm that crazy tourist, aren't I? The one who goes hiking on cliffs in Hawaii.

But damn it, this is not going to be another "almost." Too many of those in my life. 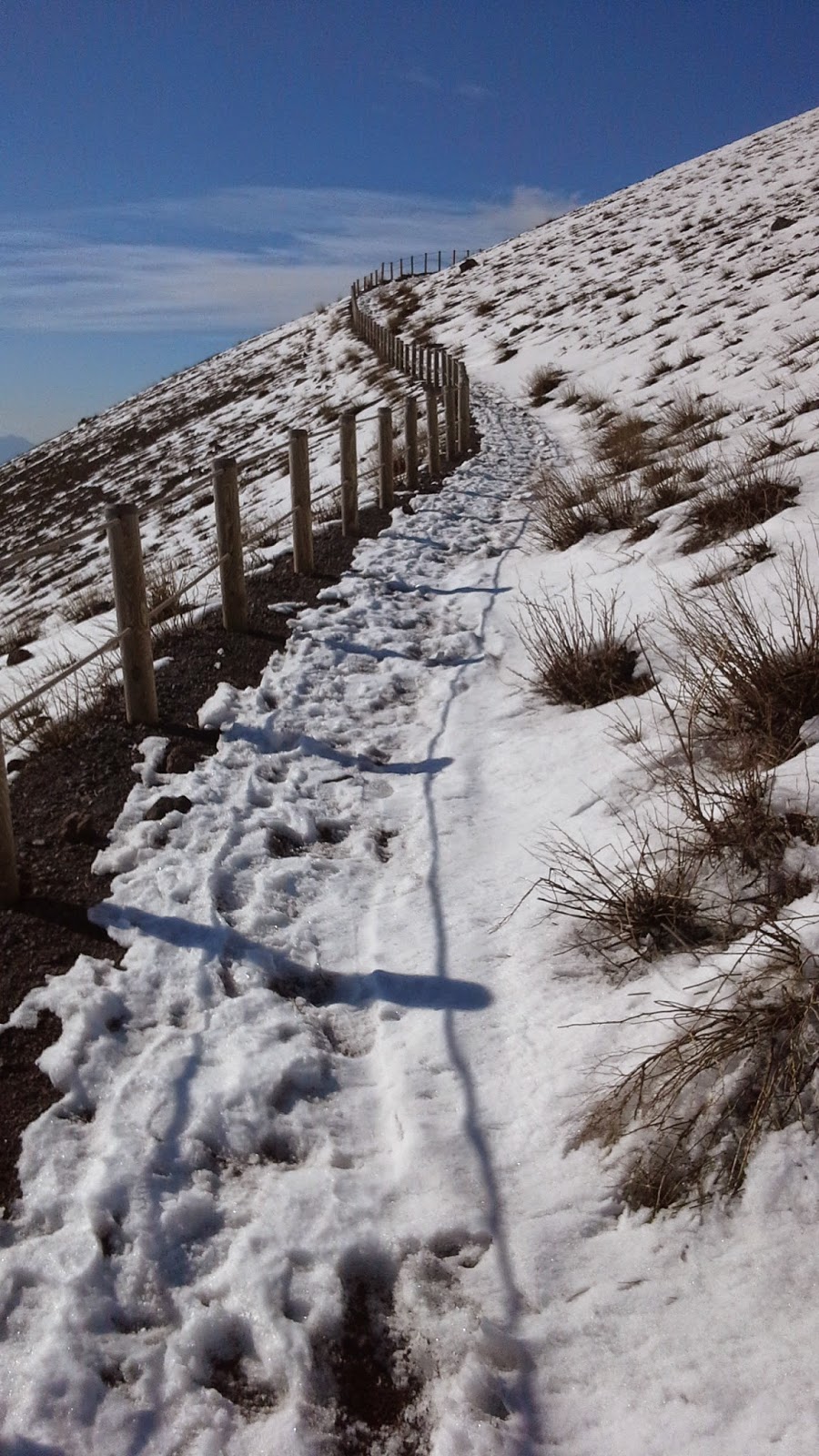 Fence poles, I love you. I can hardly feel my legs. I drag myself from one to the next.  Aerosmith sings Walk This Way. Ha. Ha.

At last I come to a view. I feel like Frodo and Sam, looking across the Misty Mountains. Hey, if they could walk that far, I can do this. I call up the spirit of my girl Maddie to walk in the snow with me a bit.

The top is just around the corner. 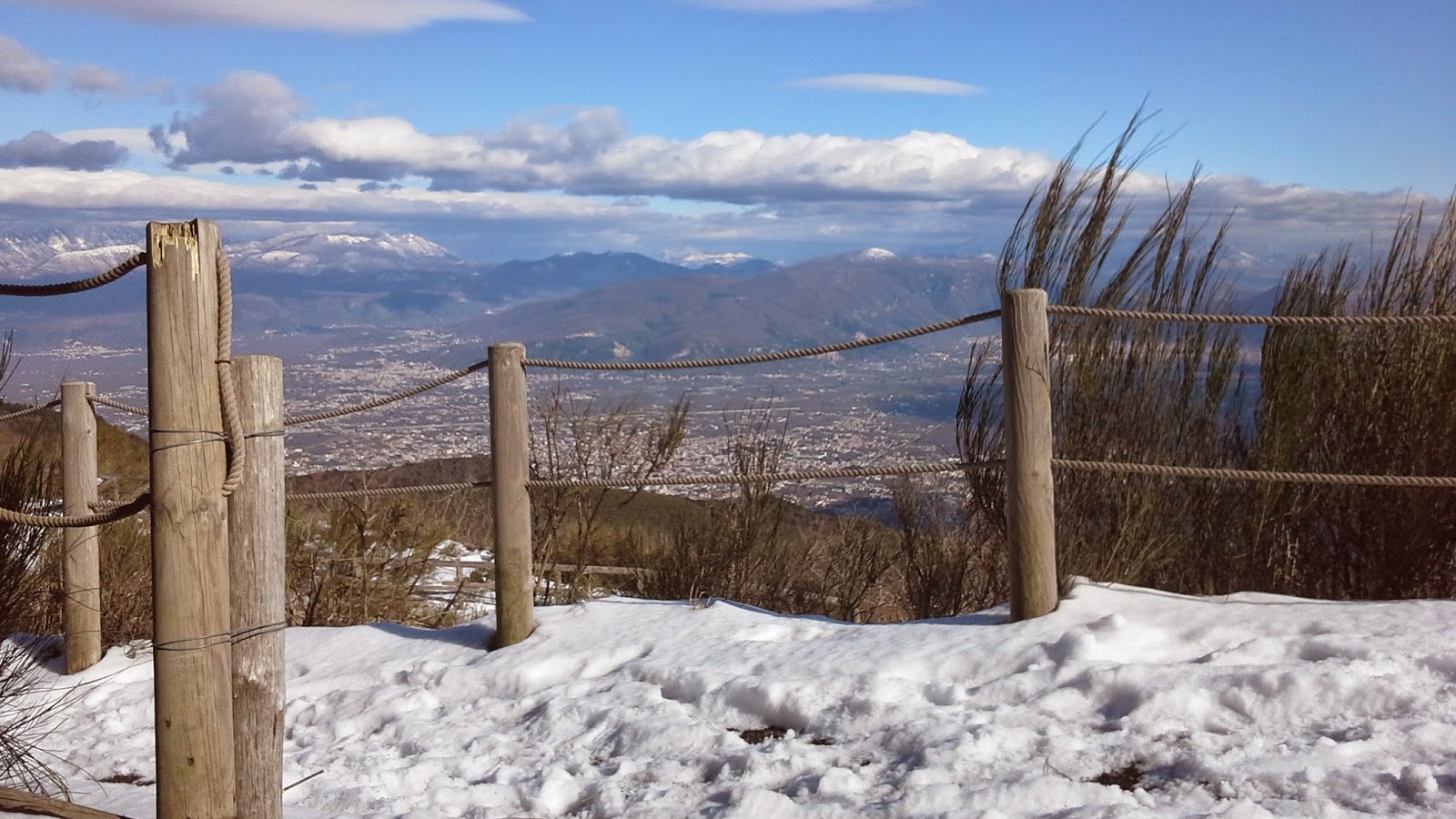 The iPod announces it's tired one more time and then quits, halfway through Non Regrette Rien.

Inside, my heart is soaring. I am so deeply grateful to be here. My heart is still pounding, but to occupy my mind, I start working on my thank-you list, like I've just won an academy award.

Daniel, Bruce, Aerosmith, Edith, who got me a little farther. Dave, so far across the world. My mom, who made this all so much easier. My dad, who took me up that first volcano.

I had forgotten how much I cried, going up that mountain when I was seven. My legs are screaming.

Jenny. Alexa. My girlfriends. My family. My board of directors. Steve Brown. My clients. My friends. My fans. All of my teachers. All the Italians. Everyone who urged me to come. Writers. Poets. Artists. God.

And Fabio, for the antibiotics. I can't believe I'm this alive now. 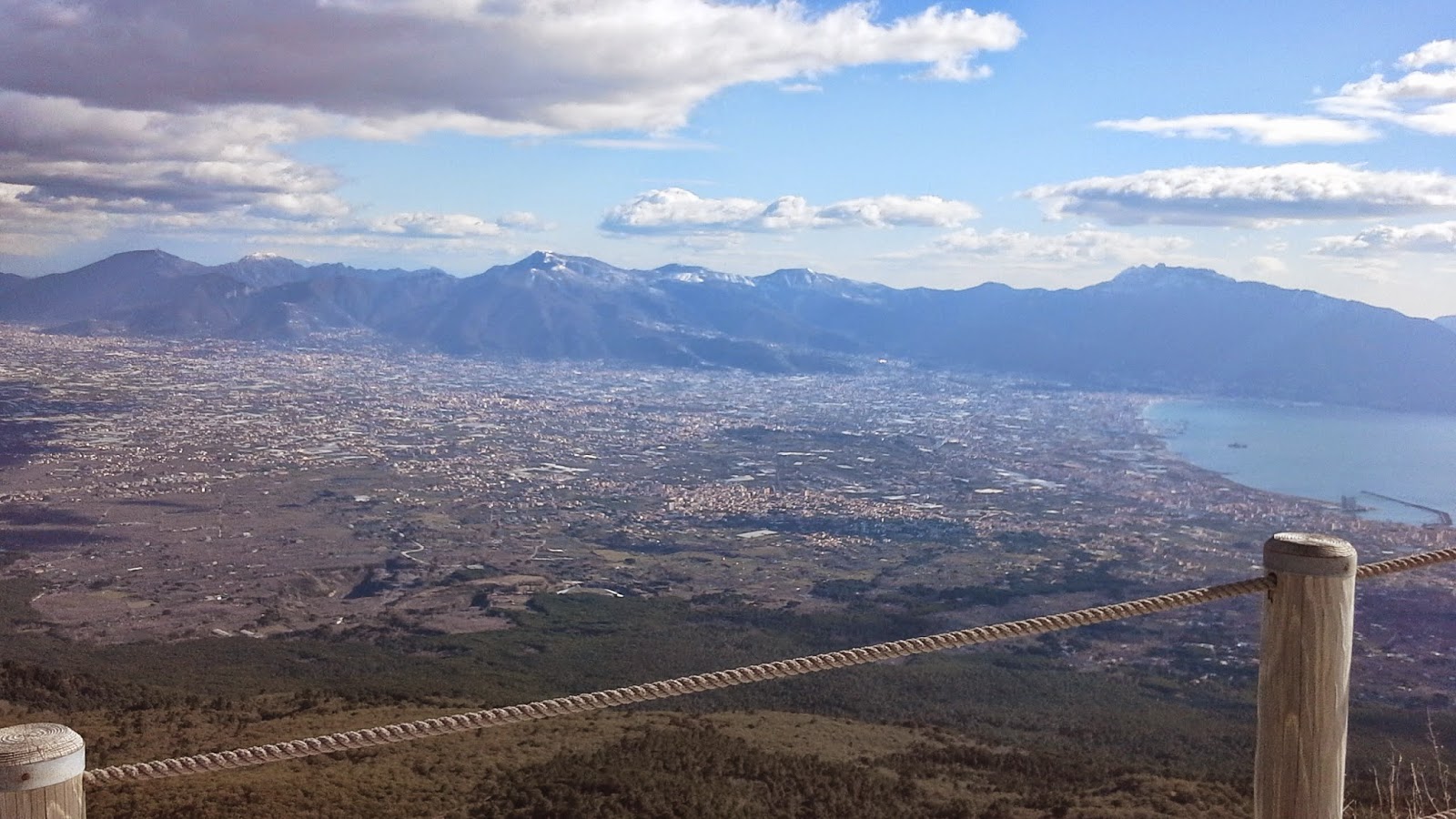 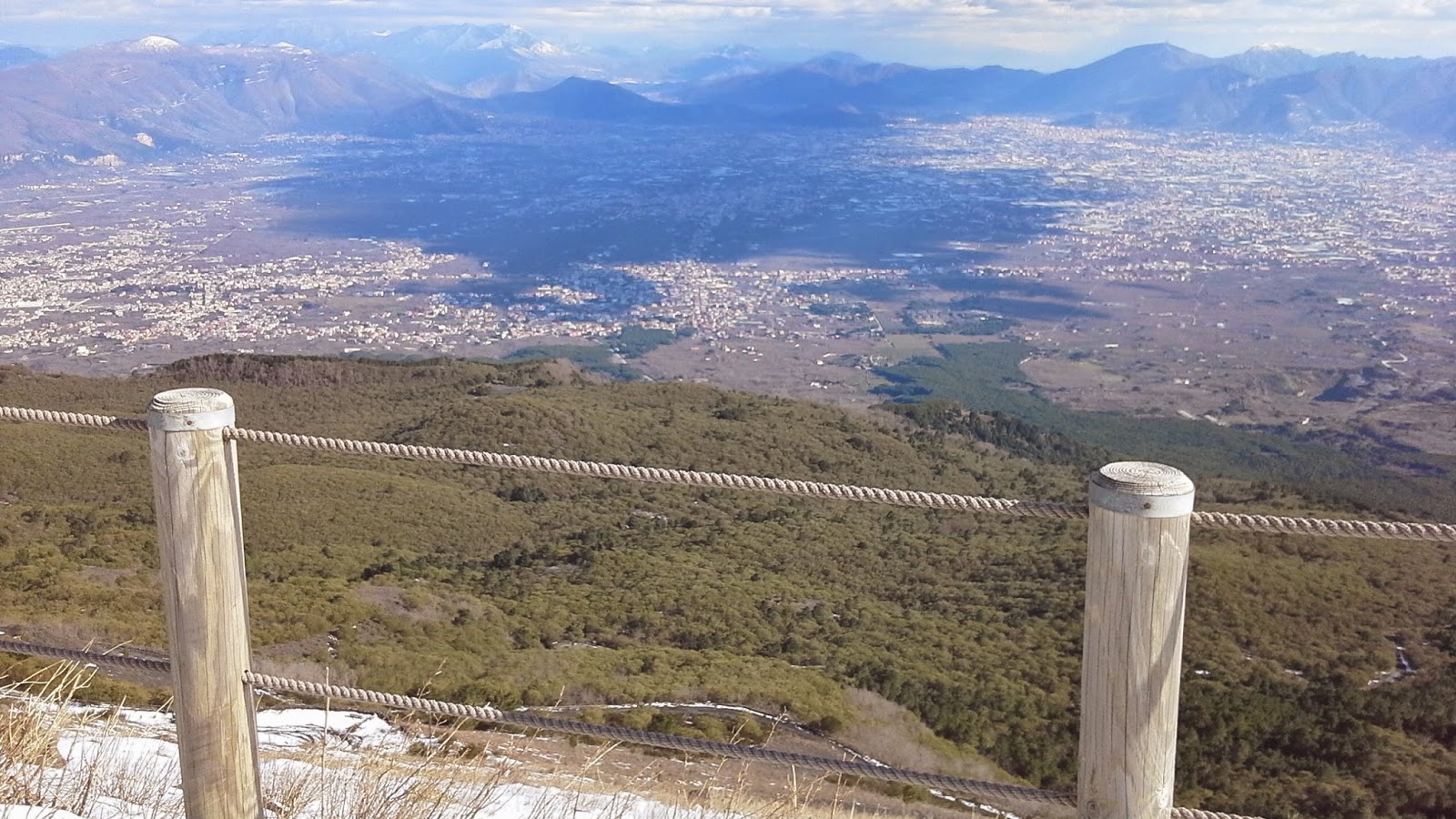 I couldn't linger too long at the views; it was just above freezing and inside my plastic jacket I was soaking wet. 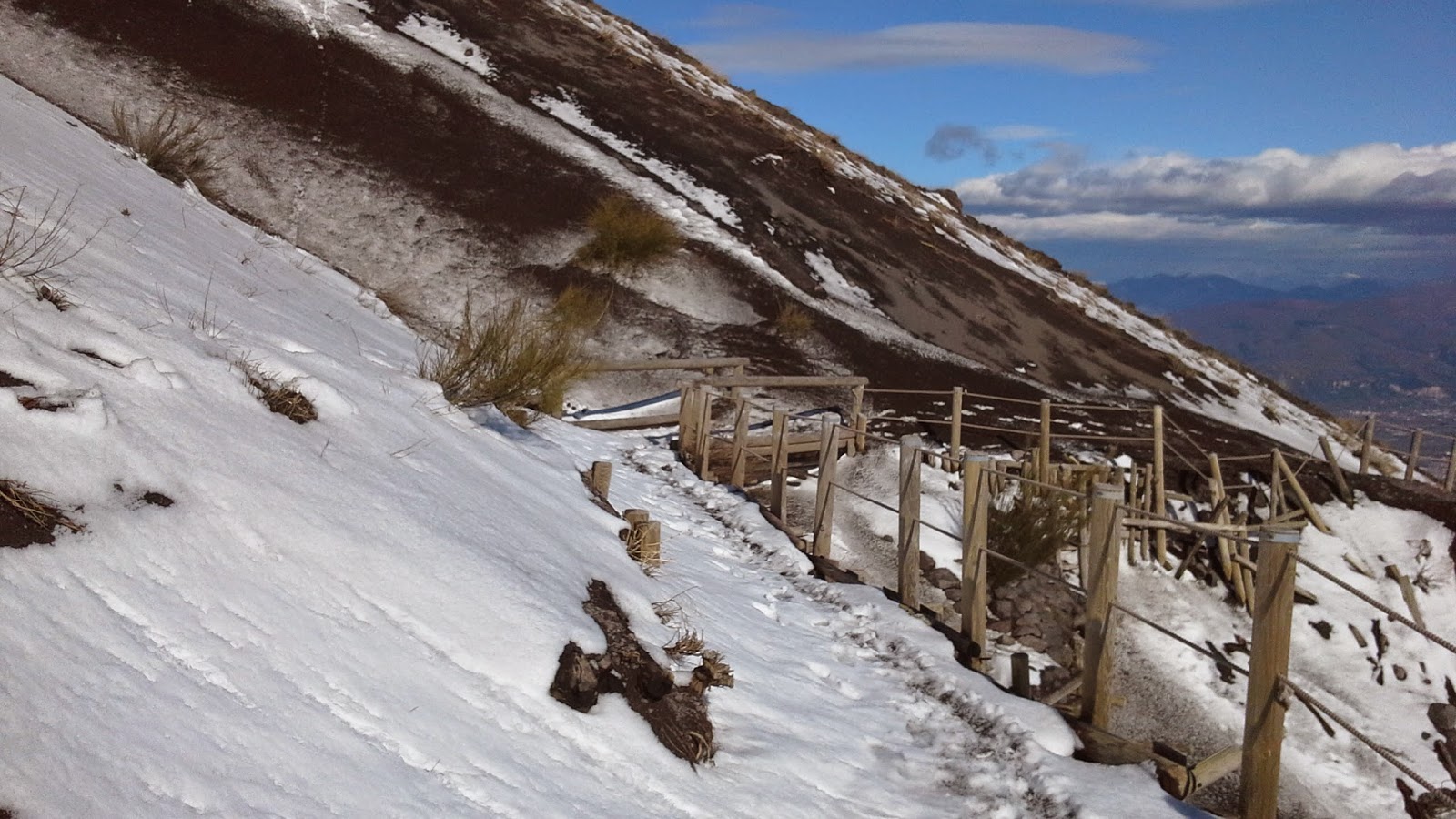 There was one part that was actually kind of sketchy. A slide of rubble on top of a slide of snow. I didn't stop for a photo... but you can see the white tracks where I stepped carefully and hastily.

The next bend provided me with an uphill stairway. Two German hikers were coming down. I was overjoyed to see other humans on this moonscape. "Noch ein halb-stunde," they said, another half-hour. (Grrr!!!!)

There was a little shack above, with icicles melting into a tub. I put my lips to the rippling water, glad it was a few degrees above freezing, not below. 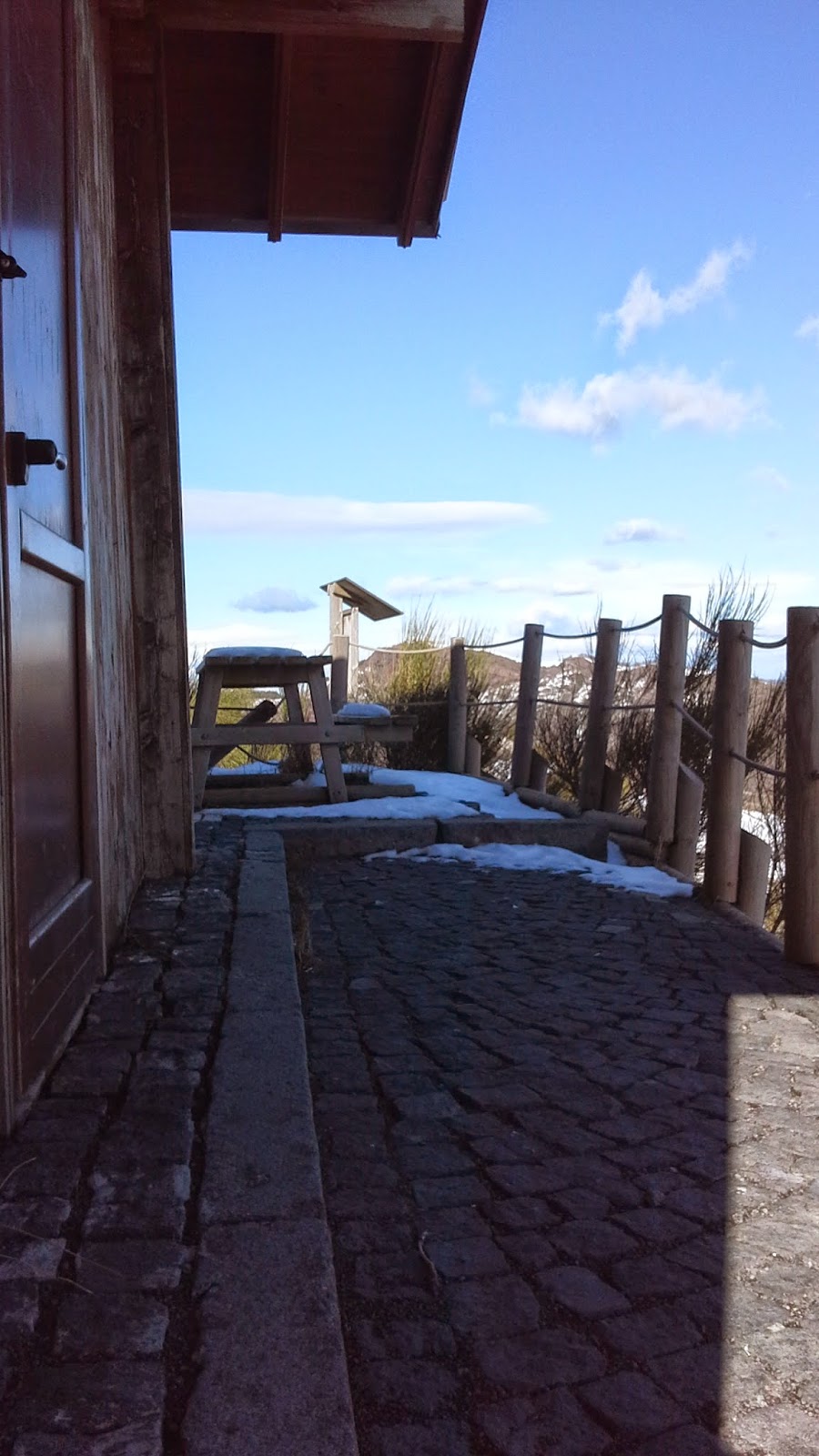 Around another corner, another expanse. #$%^@&! Would this never end? I can barely move my legs!

The next hour was fueled almost entirely by anger. Vesuvius is kind of a symbol of that. I swore a blue streak at the wind, at the hill, at the stupid advice I'd been given, at the weather report, at my stupid self for not knowing better what I was getting into, at Mercury, at all the obstacles that continue to show up just when things are going right, about how I seem to do everything the hard way. Later, I would look at Google maps and see that, indeed, there was a much shorter route. 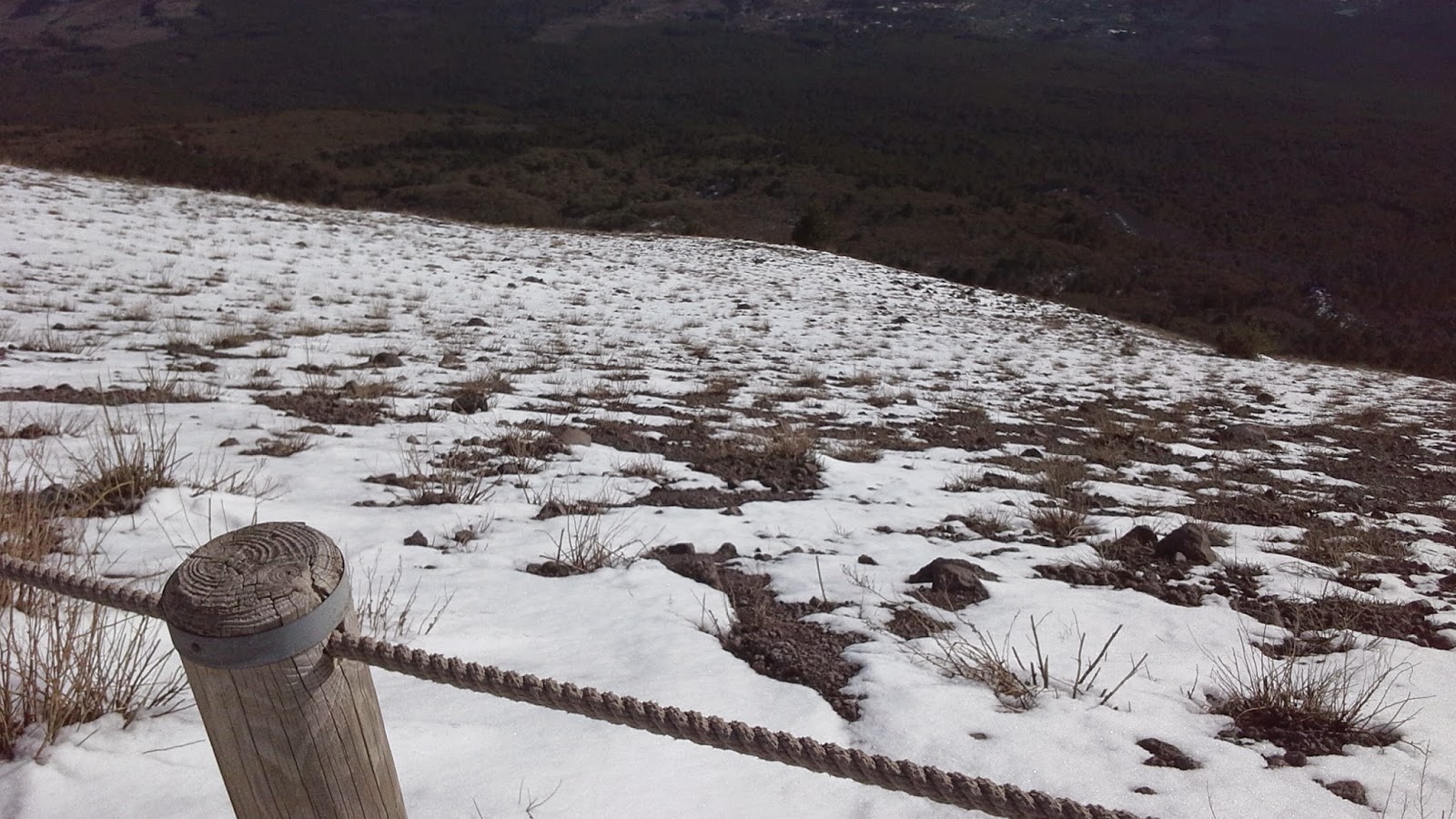 Anger is powerful fuel. The wrath of Achilles and all that. It even helped me have a baby once. That worked out okay.

I somehow made it to the top.

I practically crawled around the final corner, only to find a rope stretched across the entrance. 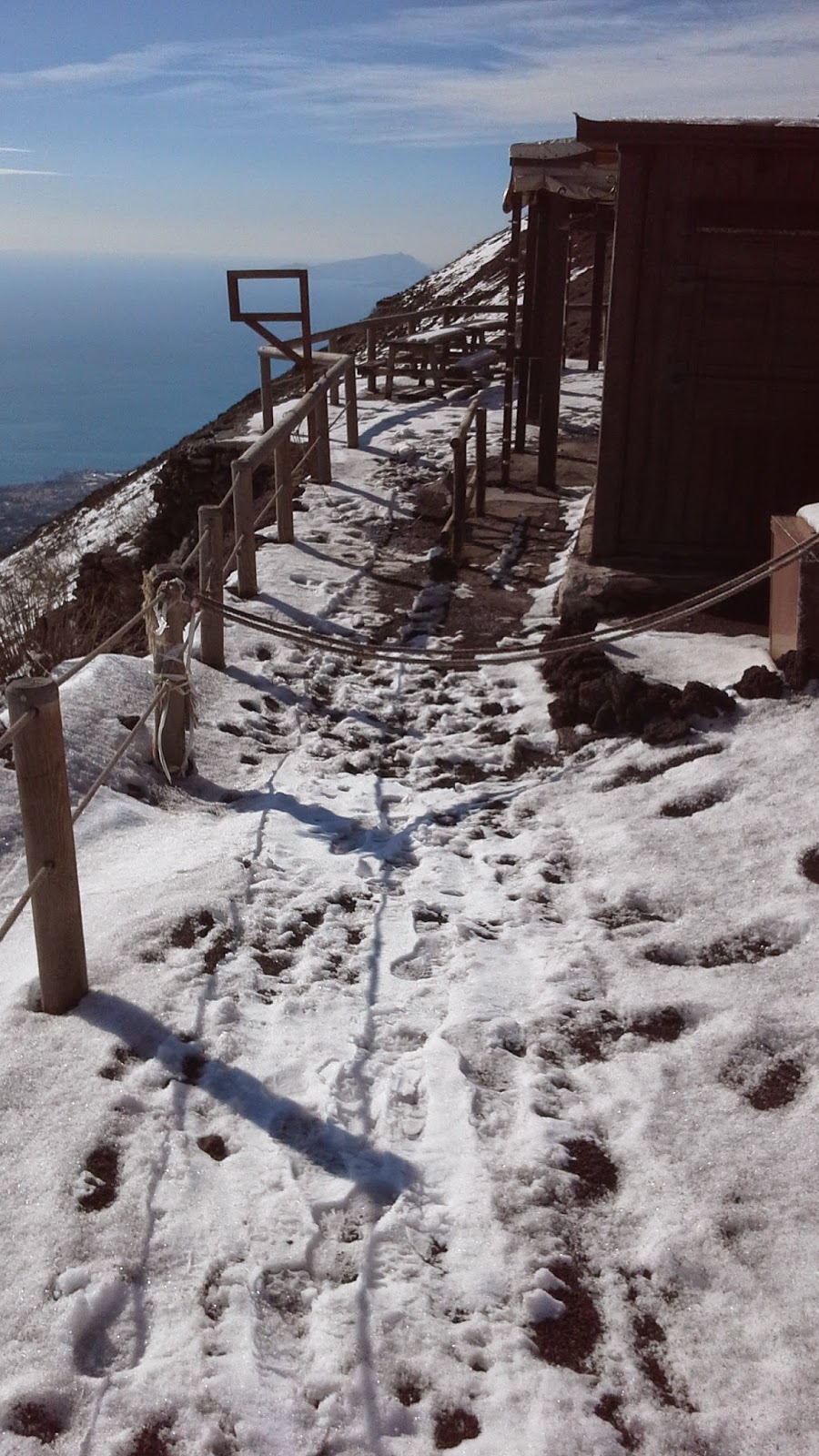 Oh shoot, it's closed, I'd better turn back. 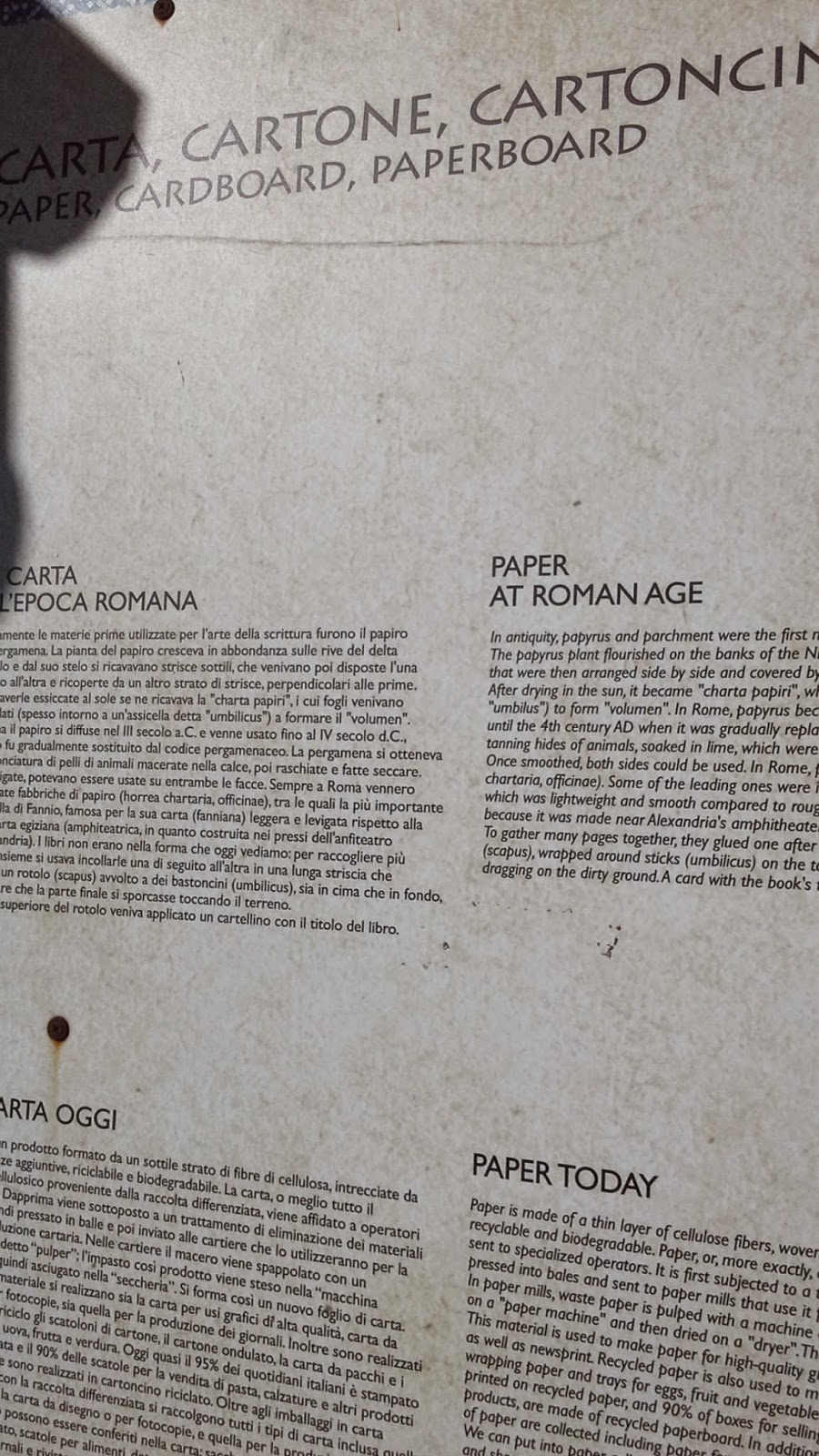 Posted on the shack was some random information about paper. WTF, Italy?

But I was there.

Off the Amalfi Coast lies the island of Capri. On it, the hills of Anacapri.

There was no boiling lava, just some steam.

But I had achieved my goal.

I wrote my prayers on crumpled paper and tossed them into the crater.

The asshole of Vesuvius blew them back in my face. 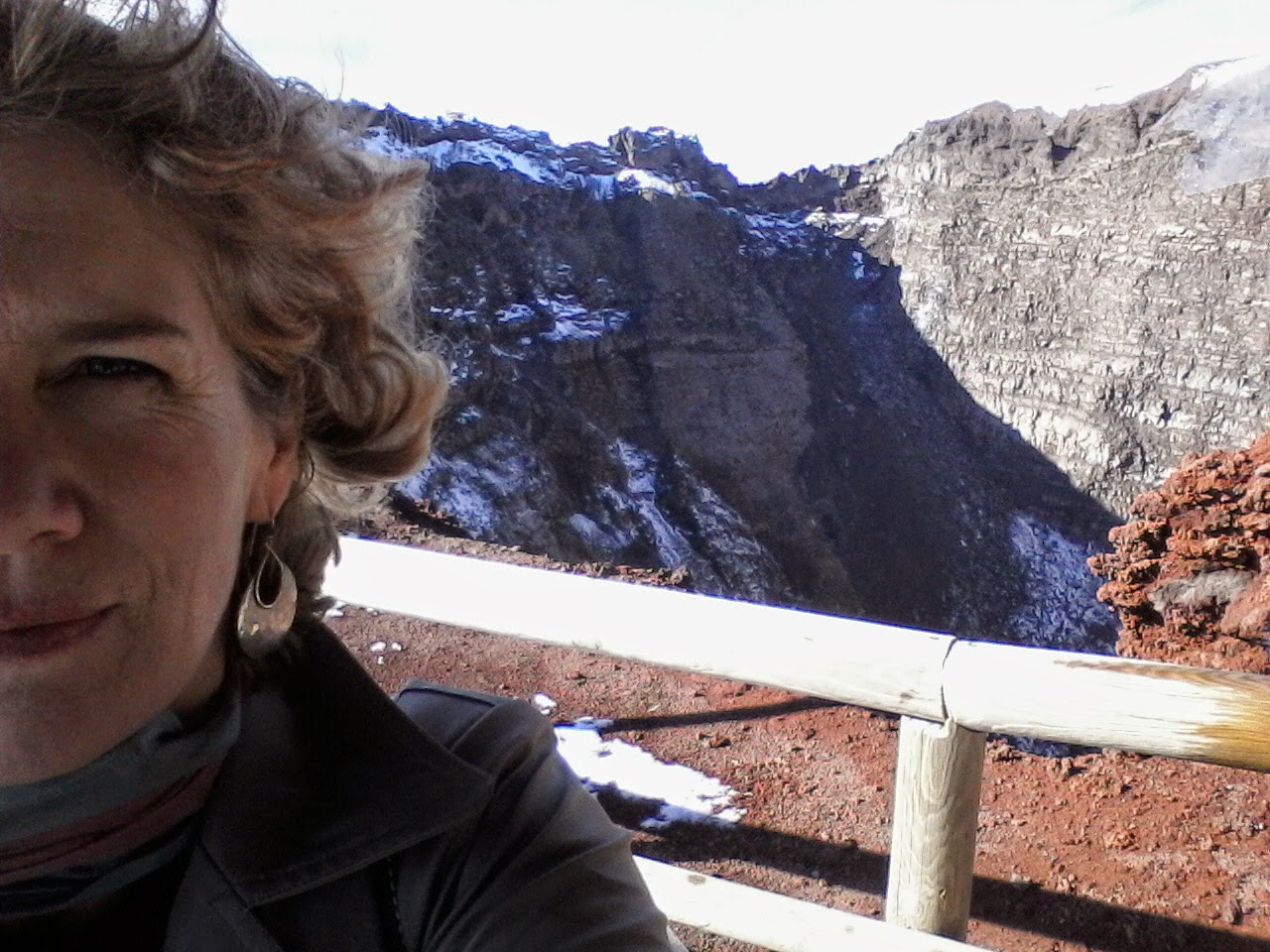 It was a long way down.